SEOUL, Oct. 8 (Yonhap) -- The government will seek to come up with additional measures to rein in soaring "jeonse" rates as part of efforts to stabilize the housing market, the country's chief economic policymaker said Thursday.

Finance Minister Hong Nam-ki, who doubles as the deputy prime minister for economic affairs, made the remark during an annual parliamentary inspection of the ministry.

"Jeonse rates have risen considerably over a short period of time and they are unlikely to go down easily down the road," Hong said when asked about an upturn in jeonse deposits. "The government will seek to map out new countermeasures."

It is regrettable that a series of recent measures have failed to stabilize rising jeonse deposits, and home owners have excessively hiked rates by capitalizing on loopholes in related laws, he added. 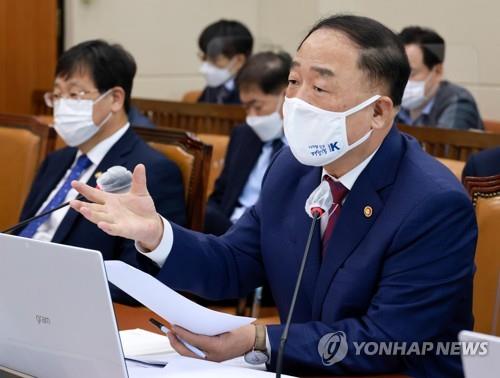 The laws guarantee the validity of a house lease contract for up to four years and cap the maximum rent hike at 5 percent in the event of contract renewals.

Hong further said apartment prices have remained flat or been firming up since the government unveiled a set of government measures to stabilizing the real estate.

On top of the passage of the three property laws, the government has also announced tax hikes, loan regulations and plans to supply more homes Seoul and surrounding areas.

Stoking public discontent with the Moon Jae-in government, housing prices and rents have been rising sharply in the Seoul metropolitan area, where half of South Korea's 52 million people live.
(END)