SEOUL, Oct. 8 (Yonhap) -- The ruling Democratic Party (DP) hinted Thursday that it may seek to modify the controversial government bill on allowing abortion only at an early stage of pregnancy, after it drew backlash from women's rights groups and even those in the party.

The revision plan was in line with the Constitutional Court's ruling last year that the country's criminalization of any abortion under the Criminal Act is unconstitutional.

The follow-up revision bill by the government, however, was met with an immediate backlash among women's rights advocacy groups, which call for the abolition of any abortion ban. 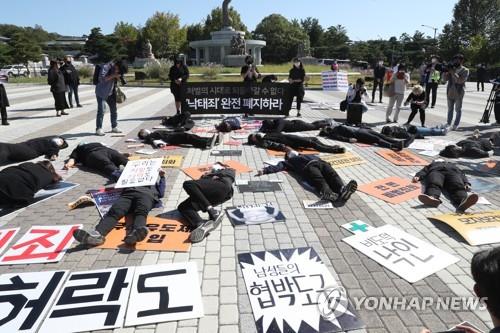 "The government has no other choice but to propose a law based on the ruling by the Constitutional Court, and thus the content needs to be modified at the National Assembly," a key DP official told Yonhap News Agency over the phone on condition of anonymity. "We're going to find a way, gathering opinions from all walks of life."

The official said the government bill appears to be "insufficient," adding that it is his personal view.

"(The party) will listen carefully, as there are complaints about (the bill's) retaining of the anti-abortion provisions under the Criminal Act," the official said.

Under the Constitutional Court ruling last year, the National Assembly has until the end of this year to approve the revision of the related laws. The government plans to submit its bill to the assembly soon after getting it through necessary administrative procedures.

Taking side with women's rights advocacy groups, several DP lawmakers have thrown their support behind the option of abolishing the abortion ban entirely.

"The revision bill was formulated in a way that it can happen to further consolidate the abortion ban," DP Rep. Park Ju-min wrote on his Facebook account.

"Through a legislative proposal and review of (bills), I will completely lift the abortion ban," he said.

The current Criminal Act stipulates that a women can by punished by up to one year in prison or a fine of up to 2 million won (US$1,733) for having an abortion, and abortion is only legally allowed in the case of rape or when sustaining the pregnancy could put the expectant mother's health at great risk.

Medical workers who provide an abortion are punishable by up to two years in prison as well under the Criminal Act. 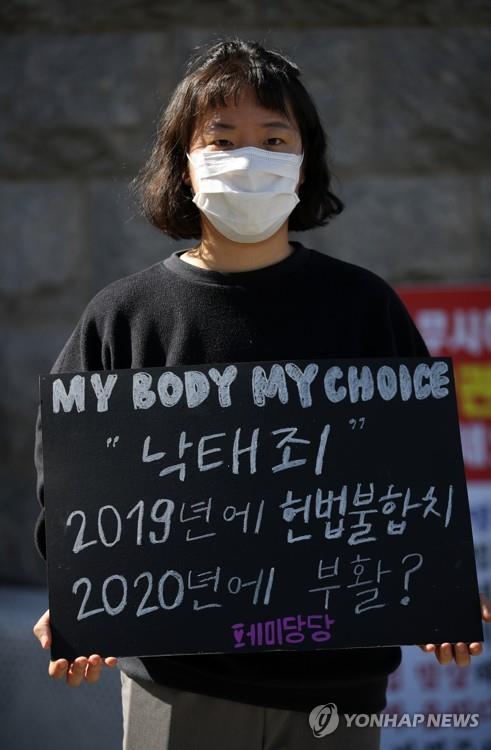