Trading volume was moderate at about 939 million shares worth some 12.2 trillion won (US$10.6 billion), with gainers outnumbering losers 510 to 300. 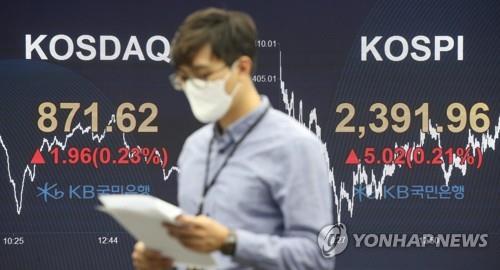 "The U.S. stimulus for the airline and some other industries led the overnight Wall Street rallies and gave local stocks an uptick push," Kiwoom Securities analyst Seo Sang-young said.

Investors' appetite for risk also hiked on the back of the Federal Open Market Committee (FOMC) minutes, as some of the committee members implied openness to increasing the asset-buying program to support the pandemic-hit economy.

The local currency closed at 1,153.3 won per dollar, up 4.9 won from the previous session's close.

Bond prices, which move inversely to yields, closed mixed. The yield on three-year Treasurys lost 0.3 basis point to 0.907 percent, and the return on the benchmark five-year government bond added 0.7 basis point to 1.207 percent.