SEOUL, Oct. 8 (Yonhap) -- An American soldier stationed in South Korea and a retiree from the U.S. Forces Korea (USFK) have tested positive for the new coronavirus, the U.S. military said Thursday.

The soldier at Camp Humphreys in Pyeongtaek, some 70 kilometers south of Seoul, was confirmed Wednesday to have been infected with COVID-19 following a recent visit to his family members in the northern county of Yeoncheon, Gyeonggi Province, according to USFK.

USFK said the soldier immediately sought testing after learning of his family testing positive for the virus.

The other patient was a retiree who resides in Seoul. He has access to all USFK installations and last visited Osan Air Base in Pyeongtaek and Yongsan Garrison in Seoul on Monday, according to USFK.

South Korean and U.S. health authorities "are actively conducting contact tracing to determine whether anyone else or other locations may have been exposed or visited," USFK said, adding that it is conducting thorough cleaning of known locations visited on the bases.

The latest cases brought the total number of USFK-related infections to 203, most of whom tested positive upon their arrivals here from the United States. 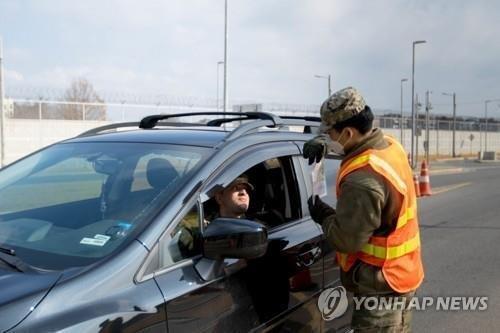