SEOUL, Oct. 9 (Yonhap) -- Senior North Korean officials paid their respects at the mausoleum for the country's late leaders ahead of the 75th founding anniversary of the ruling Workers' Party, state media reported Friday.

North Korean leader Kim Jong-un was not among the visitors to the Kumsusan Palace of the Sun, where the bodies of founding leader Kim Il-sung and his late successor Kim Jong-il lie in state, according to the official Korean Central News Agency.

A floral basket was placed in the name of leader Kim before the late leaders' statues, KCNA said.

The senior North Korean officials included the North's No. 2 leader Choe Ryong-hae, president of the Presidium of the Supreme People's Assembly; Pak Pong Ju, a vice chairman of the State Affairs Commission and a former premier; and current Premier Kim Tok-hun.

The Oct. 10 founding anniversary is one of the North's biggest national holidays, along with the birthdays of the two late leaders. The North is expected to hold larger celebratory events this year as the regime usually does so on every fifth and 10th anniversary.

It is unusual for leader Kim to skip a visit to the mausoleum because this year is a fifth anniversary. Since taking over as leader after his father's death in late 2011, Kim has visited the mausoleum five times to mark the party anniversary -- in 2012, 2013, 2015, 2018 and last year. 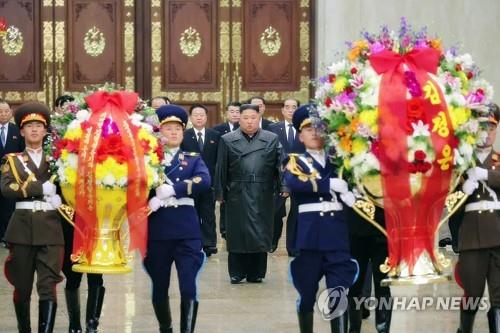