The young guns nearly got the better of their older counterparts, but senior team striker Lee Jeong-hyeop spoiled that with his 89th-minute equalizer at Goyang Stadium in Goyang, just northwest of Seoul in Gyeonggi Province.

The two teams will go at it again at 8 p.m. Monday at the same stadium. The U-23 squad will be the home team in the second contest.

The U-23 team scored twice in the second half to erase an early 1-0 deficit. Song Min-kyu, in his first national team appearance, made it a 1-1 tie in the 50th minute for the younger squad, and an own goal by the senior team captain, Kwon Kyung-won, put the U-23 side ahead. 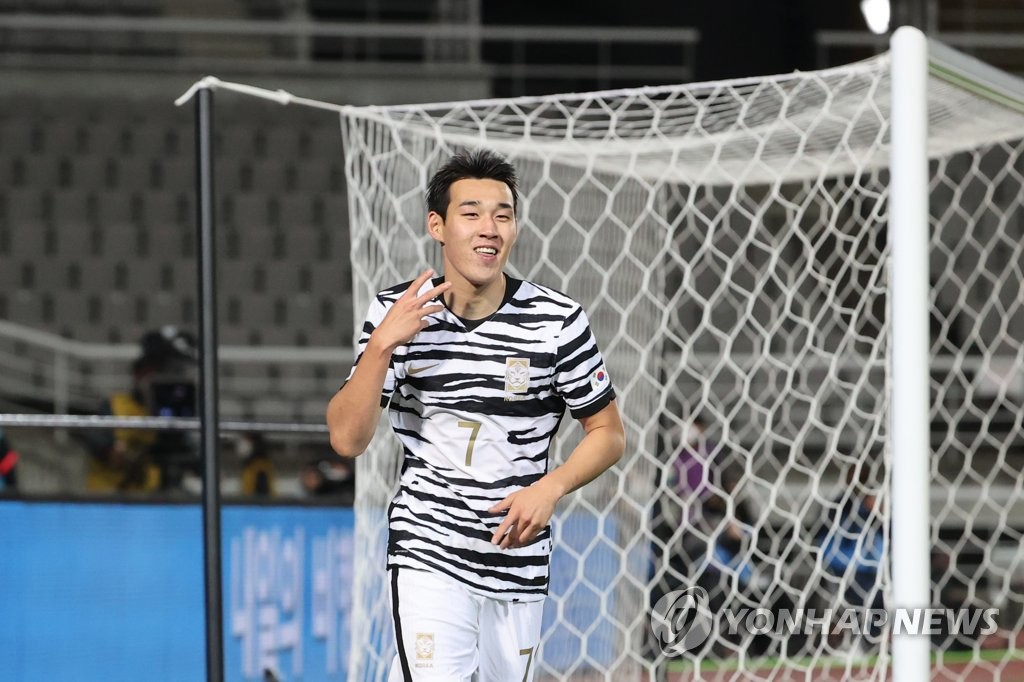 The aggregate score will determine the winner, with the away goal rule in effect. In case of a tie after two matches, the teams will go to a penalty shootout, without playing extra periods.

The winning team will donate 100 million won (US$87,370) in its name to aid the country's fight against the coronavirus.

The Korea Football Association (KFA) organized these matches to give fans a long-awaited glimpse of their national teams and also allow coaches -- Paulo Bento for the senior team and Kim Hak-bum for the U-23 side -- to test potential candidates for future competitions. 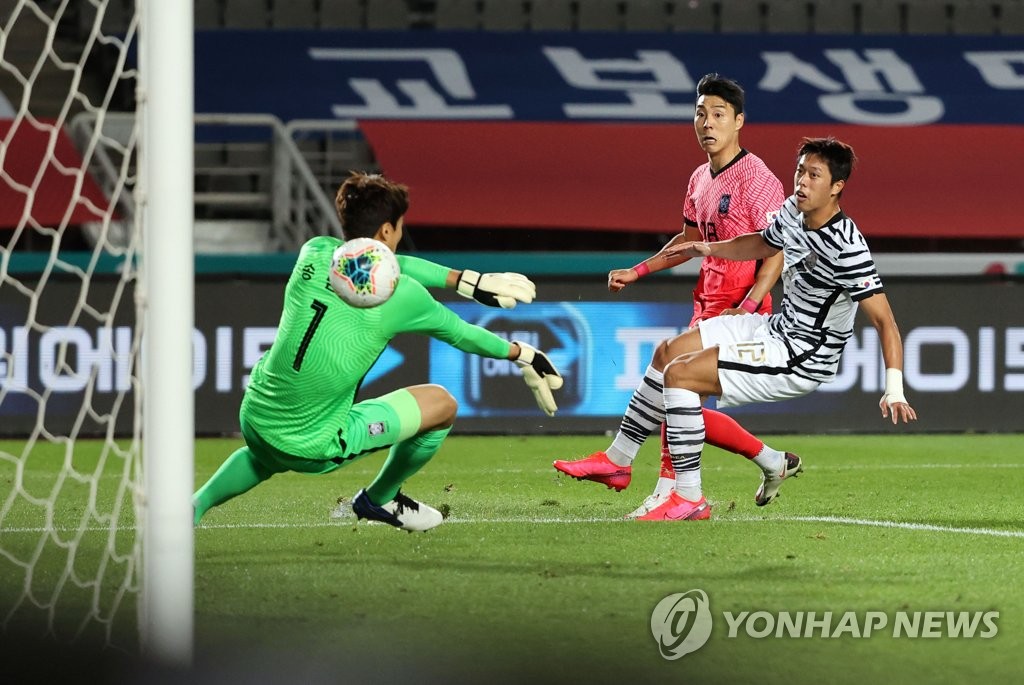 Bento's team hasn't played any international match this year, due to effects of the COVID-19 pandemic. They would have completed the second round of the Asian qualifying for the 2022 FIFA World Cup this year. Their last official competition was in December last year.

Kim's U-23 team qualified for the 2020 Tokyo Olympics by winning the Asian qualifying tournament in January, but the Olympic Games have been postponed by a year because of the pandemic. The U-23 team hasn't had any official matches since January. 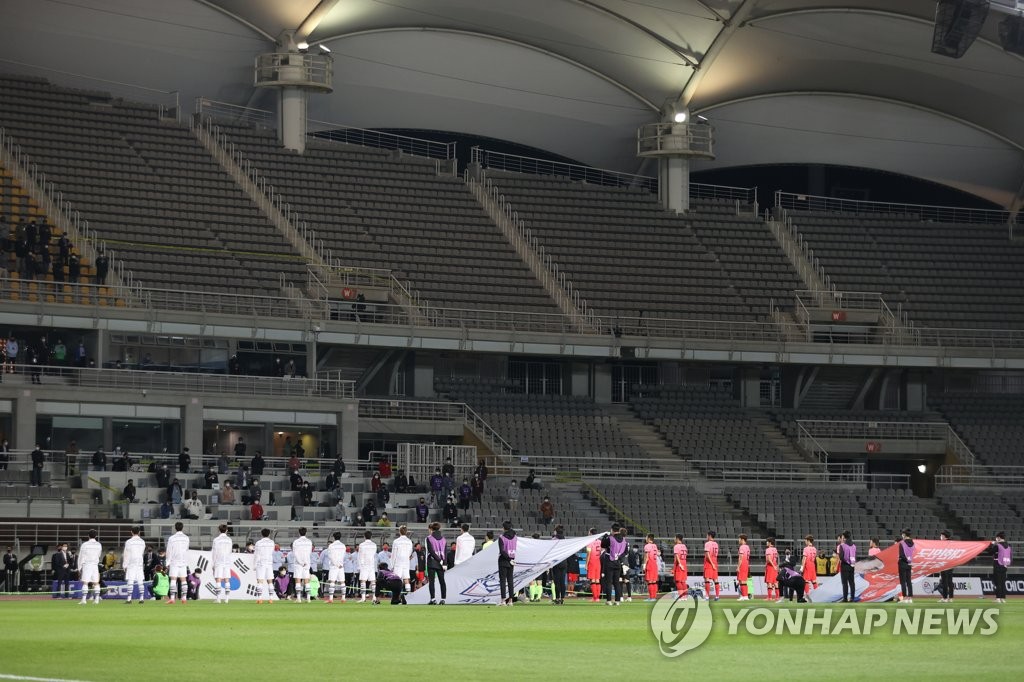 Because of 14-day quarantine required for all inbound travelers to South Korea, overseas-based stars were not selected for these exhibition matches. The 23-man rosters for the two sides are entirely made up of players from the domestic K League.

Jeonbuk Hyundai Motors defender Lee Ju-yong opened the scoring for Bento's team in the 14th minute. He was left wide open when he took a pass on the left wing, and he cut to the center of the box and fired a shot past defender Yoon Jong-gyu and into the net.

The U-23 squad had some promising moments in the first half, with Song's header off a Yoon Jong-gyu cross going right at goalkeeper Jo Hyeon-woo.

Song, the 21-year-old Pohang Steelers forward, broke through five minutes into the second half with some great individual effort. After taking control of the ball just outside the box, Song charged in and danced past three defenders before firing a left-footed shot past Jo for a 1-1 tie.

Song is tied for most goals by a South Korean player in the K League 1 this season with 10.

Eight minutes later, the U-23 team took the lead with some fortuitous bounces. 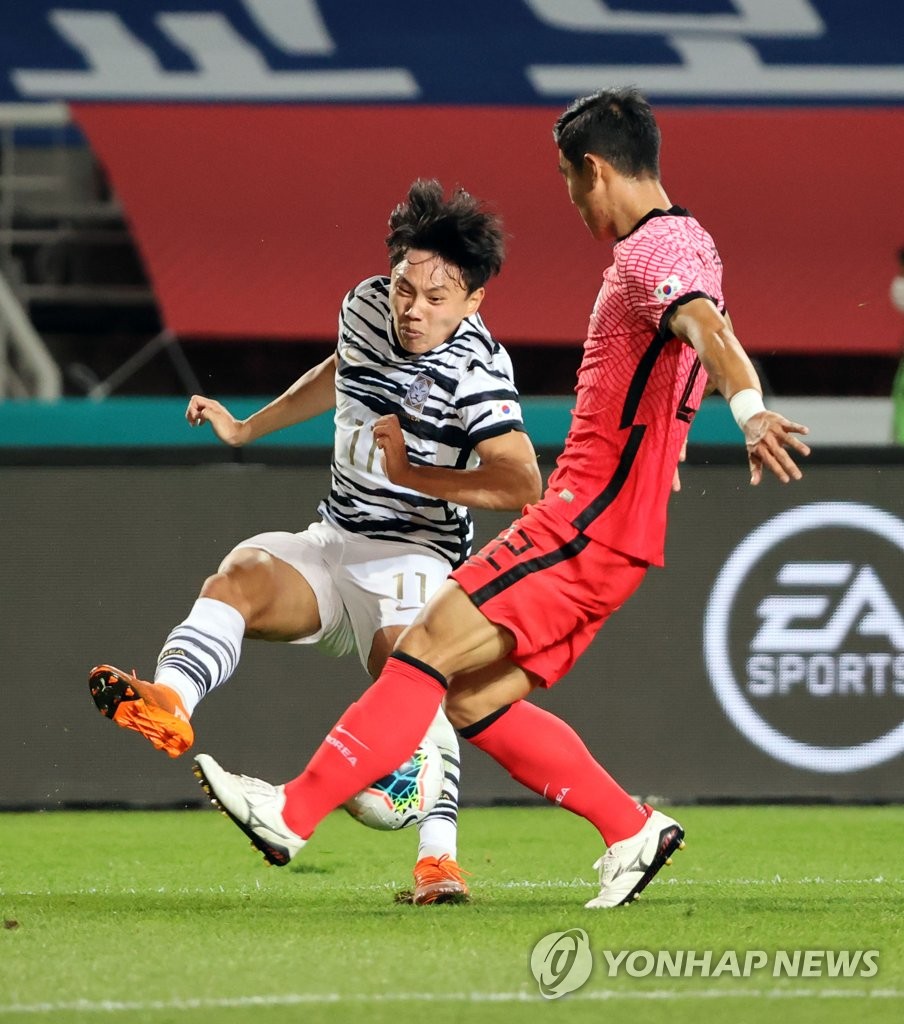 Jo made a spectacular save on Cho Young-wook's shot, and Cho Gue-sung got the rebound on the left side and headed the ball toward the middle. The attempted pass pinballed off the leg of defender Kwon, the right goal post and Kwon's knee again on its way into the net.

The senior team generated few scoring chances the rest of the way. The U-23 nearly took a 3-1 lead in the 81st minute, when Um Won-sang, after a pretty give-and-go play with Oh Se-hun, fired a shot from the right side and forced Jo to make a difficult save.

They would rue that missed opportunity, as a pair of second-half subs for the senior side connected for a late game-tying goal.

On a rare counterattack chance in the 89th minute, midfielder Kim In-sung charged toward the net up the middle and found Lee Jeong-hyeop to his right. The striker for Busan IPark made no mistake with his low shot past diving goalkeeper Song Bum-keun.

The goal saved face for Bento's team, who got outplayed for most of the second half.