(ATTN: UPDATES with another press briefing in last 4 paras)

In particular, the KDCA said 23 new patients were confirmed in Seoul, 24 in Gyeonggi Province and eight in Incheon. 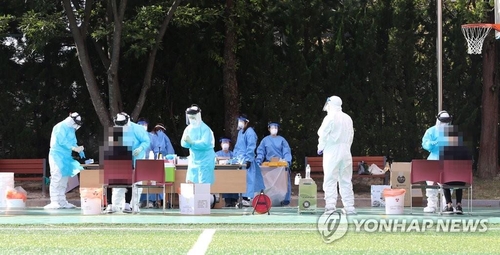 The government plans to announce a decision Sunday on whether to adjust its social distancing guidelines, currently at Level 2.

On Saturday, the number of new diagnosed cases in the greater Seoul area came to 55, above 50, which is the criterion for Level 1.

Health authorities said among lingering risk factors are the continued spread of the coronavirus in the greater Seoul area, home to about half of the nation's 52-million population, door-to-door sales activities and cluster infections in high-risk facilities.

The Central Disease Control Headquarters also said the proportion of cases, of which origin has yet to be traced, is staying below 20 percent.

Out of 1,032 people diagnosed with the virus from Sept. 27 to Saturday, the infection routes of 196, or 19 percent, remain unconfirmed, it said in a separate press briefing.

It added Remdesivir, known as a coronavirus treatment, has been administered to 585 patients at 62 hospitals as of 4 p.m. Friday.