SEOUL, Oct. 12 (Yonhap) -- Military authorities are analyzing details of North Korea's newest intercontinental ballistic missile (ICBM) unveiled in a massive parade over the weekend, including how many warheads it can carry, officials said Monday.

During the Oct. 10 parade to mark the 75th anniversary of the ruling Workers' Party, the communist country showed off a new ICBM, along with a new submarine-launched ballistic missile (SLBM) and other modernized weapons systems.

The new road-mobile ICBM was larger in size and has a longer front part, indicating that it is designed to carry multiple warheads and deliver a larger payload. The new ICBM was on a 11-axle 22-wheel transporter erector launcher (TEL), which is believed to be the world's largest.

"The South Korean and the U.S. intelligence authorities are closely analyzing the weapons that North Korea unveiled, including one believed to be a new long-range ballistic missile," spokesperson of the Joint Chiefs of Staff (JCS) Col. Kim Jun-rak told a regular briefing.

Asked if it is believed to be a multi-warhead missile, Kim said it is too early to determine such details because what was disclosed was only its external appearance.

"It is not clear if the new missile is real or a mock-up version, and the new version does not appear to have ever been tested so far," another military officer said.

The regime last launched an ICBM in November 2017 amid heightened tensions with the U.S.

At that time, it fired the most advanced version, the Hwasong-15, which has an estimated range of 8,000 miles, or 12,874 kilometers, which means it can strike any part of the continental U.S. The Hwasong-15 employs a nine-axle TEL, and uses liquid fuel.

In his speech during Saturday's parade, Kim vowed to continue to strengthen the war deterrent for self-defense against nuclear and other threats from "hostile forces." But he did not directly mention the U.S. and used the term "war deterrent" rather than "nuclear deterrent" in an apparent softening of his rhetoric. 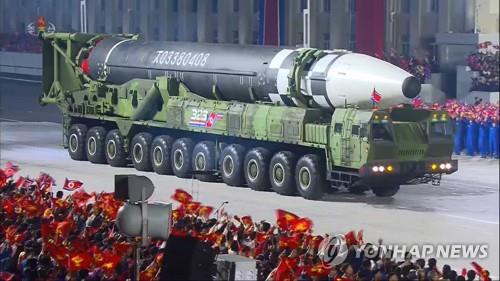