SEOUL, Oct. 12 (Yonhap) -- South Korean shares extended gains for an eighth consecutive session Monday on the back of strong advances by chipmakers and the government's decision to loosen quarantine measures against the new coronavirus pandemic. The Korean won rose against the U.S. dollar.

Trading volume was moderate at about 832 million shares worth some 10.5 trillion won (US$9.2 billion), with gainers outnumbering losers 508 to 324. 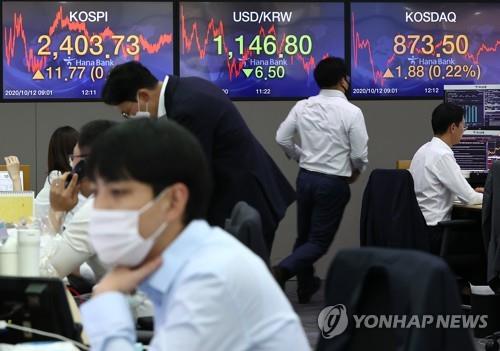 "(Local) stocks seem to have gone up due to the eased virus curbs here and the US$1.8 trillion stimulus proposal extended by the White House," said Korea Investment & Securities analyst Kim Ye-in.

On Monday, South Korea lowered its COVID-19 social distancing guidelines to the lowest level, raising hopes that the eased virus curbs can boost the economic recovery.

The local currency closed at 1,146.8 won per dollar, up 6.5 won from the previous session's close, marking the highest since April when the Korean won finished at 1,141.8.