GOYANG, South Korea, Oct. 12 (Yonhap) -- The South Korean men's senior national football team got the better of the under-23 national team in their special exhibition match series that concluded Monday.

Thanks to three second-half goals, the senior team took the second of two exhibition matches by 3-0 on Monday at Goyang Stadium in Goyang, just northwest of Seoul in Gyeonggi Province.

The two sides played to a 2-2 draw last Friday, and the senior squad, coached by Paulo Bento, finished with a 5-2 advantage in the aggregate score.

Lee Dong-gyeong, Lee Ju-yong and Lee Yeong-jae had a goal apiece for Bento in the second half, while the U-23 side, coached by Kim Hak-bum, failed to throw much of a counterpunch. 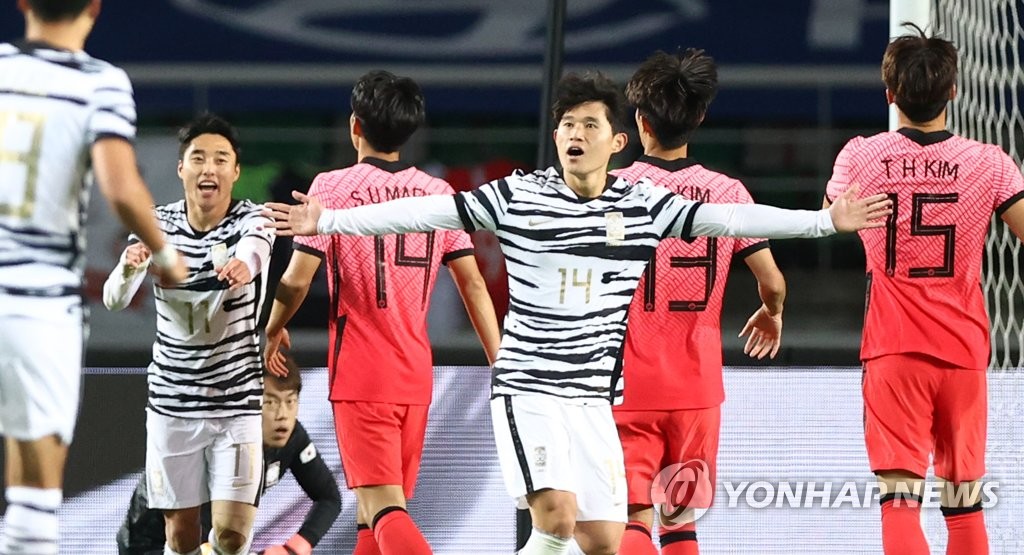 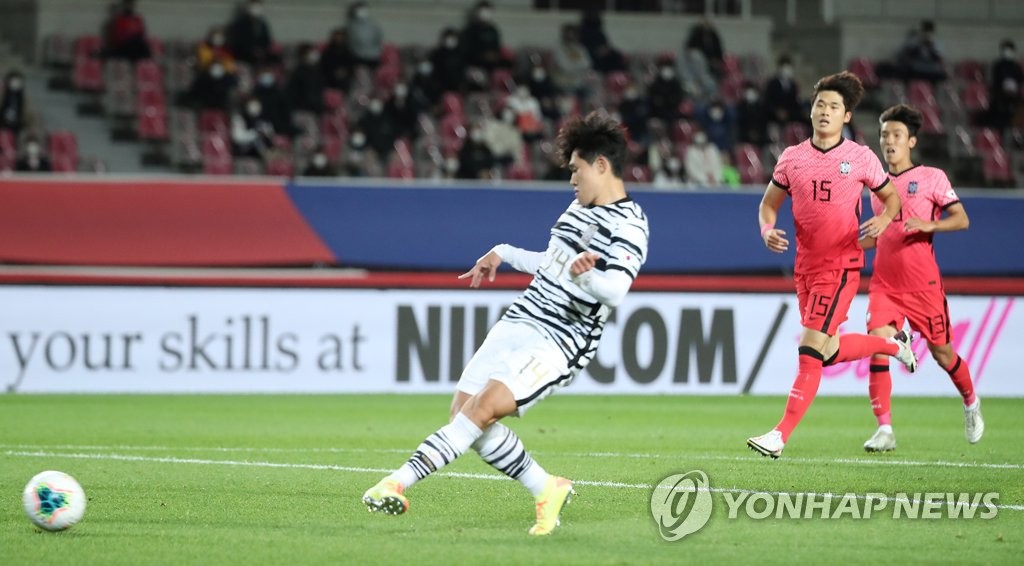 The senior team got badly outplayed in the second half of the first match, and came out with more urgency in the opening 45 minutes of this one.

The older players had little trouble getting deep into the opposing zone, consistently breaking down the U-23 defense with quick passes and deft movements off the ball. Converting their advantage in ball possession into dangerous chances was a different matter, however, as the senior team players lacked delicate touch around the net.

They had an would-be goal wiped out because of an offside call in the fifth minute, with winger Kim In-sung getting behind the defense a step too early to set up midfielder Lee Dong-gyeong for an easy goal past goalkeeper Lee Gwang-yeon. 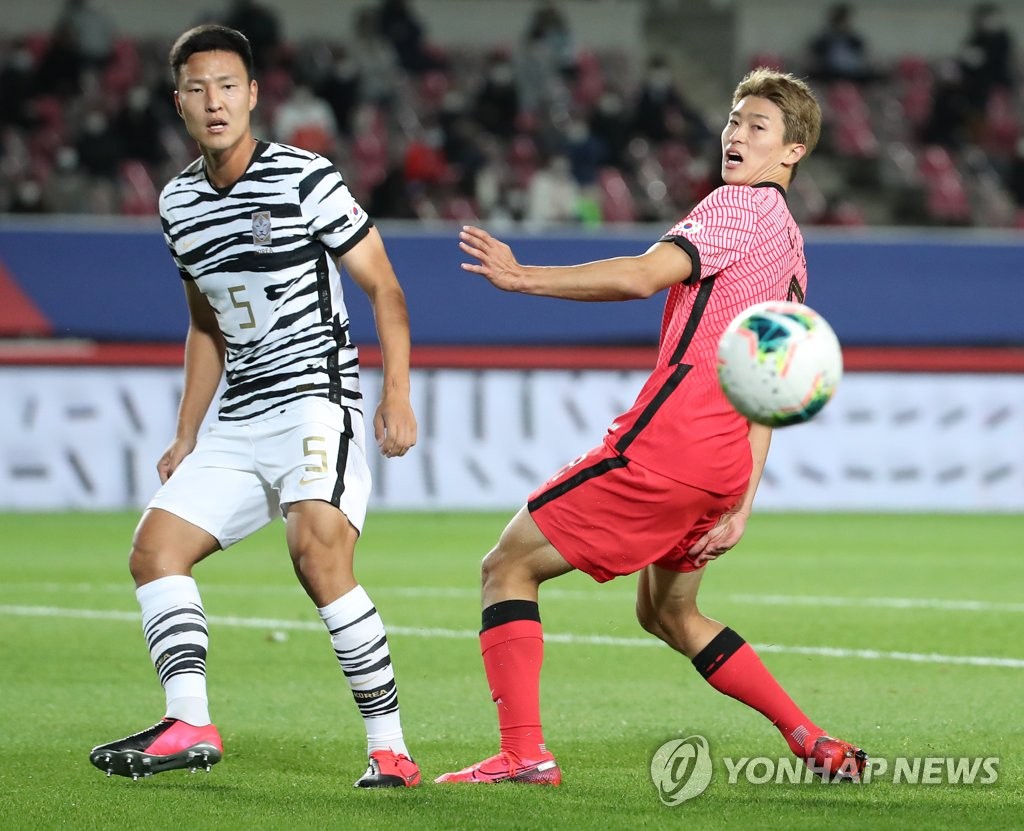 The U-23 players spent the majority of the first half in their own zone and busied themselves battling opponents near or inside the box and clearing the ball out of harm's way.

The U-23 team's only opportunity in the first half was also its most dangerous one. Defender Lee You-hyeon fired a quick shot from a few steps outside the box in the 24th minute, catching the defense off guard and forcing goalkeeper Jo Hyeon-woo to make a difficult save diving to his left.

In a goalmouth scramble following a 34th-minute corner, the senior team centerback Kwon Kyung-won tried to head home the loose ball, only to have it go off the top of the crossbar. 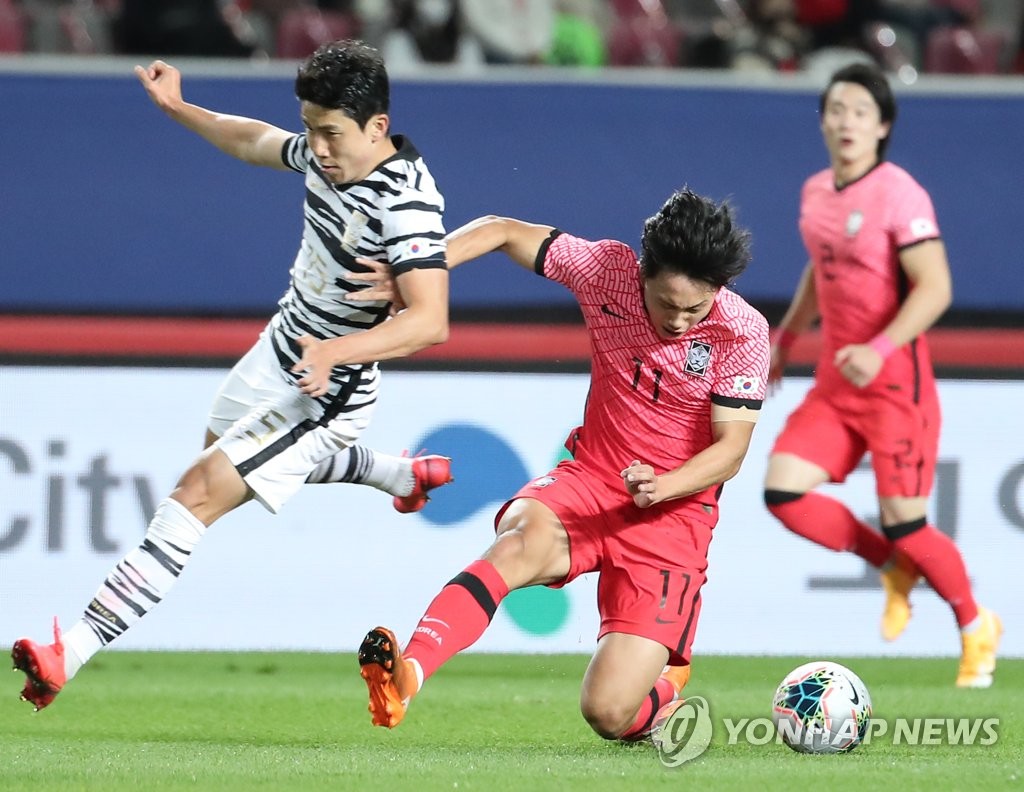 The U-23 showed some life in the opening moments of the second half, but it was the senior team that broke the deadlock in the 54th minute. Ironically, it was two players specially picked by Bento from the U-23 talent pool connecting for a perfectly-executed counterattack.

Lee Dong-jun beat opposing midfielder Maeng Seong-ung in a foot race but nearly lost his balance inside the box. He managed to stay on his feet and fed the ball across to Lee Dong-gyeong, who made no mistake in beating new goalkeeper off the bench, An Chan-gi.

At the other end, the senior team goalkeeper Jo came through with a match-saving stop in the 67th minute, turning aside Oh Se-hun's header from close range. 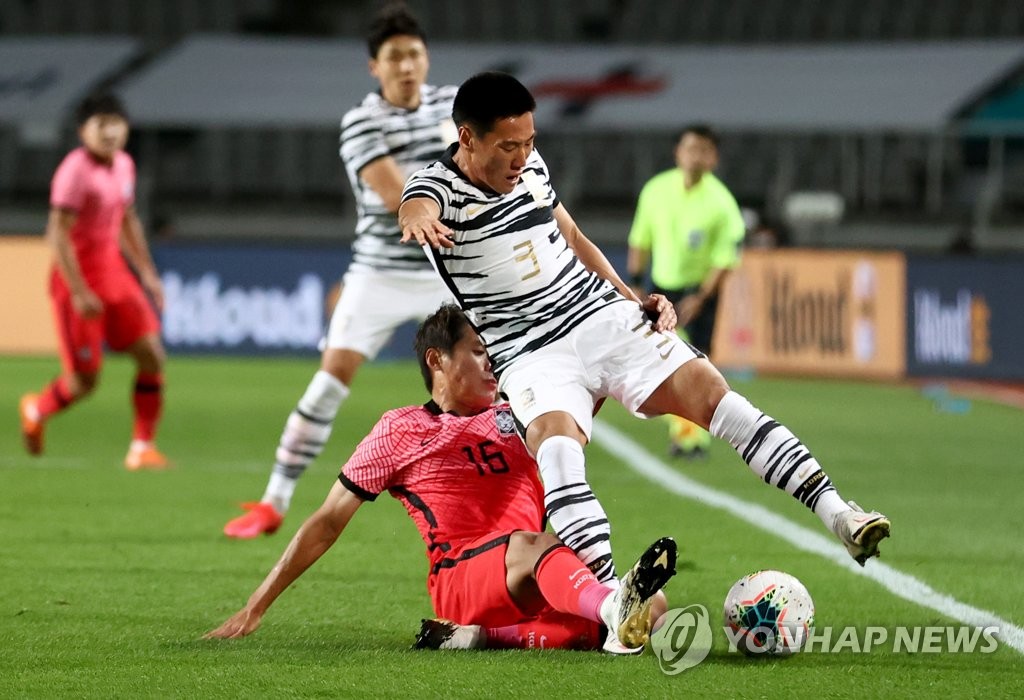 Jo took over the match in the final moments. In the 84th, Jo denied Oh again on a header. In the next minute, he made a diving save to keep out a hard strike from Kim Dae-won.

The senior team doubled the lead in the 88th minute thanks to An Chan-gi's miscue. The 22-year-old goalkeeper charged well out of the net trying to clear the ball out of the zone, but his header instead landed on the chest of Lee Ju-yong, who calmly volleyed the ball into the empty net for a 2-0 lead.

Two minutes later, Lee Yeong-jae, a second-half sub, rounded out the scoring after the deflated U-23 defense left him all alone following an innocuous pass from midfield.

Bento said afterward he was far more satisfied with his team's showing.

"We didn't have enough time to practice together but the players executed our plan really well," he said. "I think we were nearly flawlessly on defense. In the first match, we gave up a few counterattack opportunities, but today, we played the type of football we wanted to play."

The first match was played without fans. But after the government relaxed social distancing restrictions on Sunday, Goyang Stadium opened its gates to national team supporters, and 2,075 fans were on hand.

The Korea Football Association (KFA) organized these matches to give the two national teams much-needed action. Due to the coronavirus pandemic, Bento's team hasn't played any official international matches this year, whiel Kim's side last competed in an international tournament in January this year. 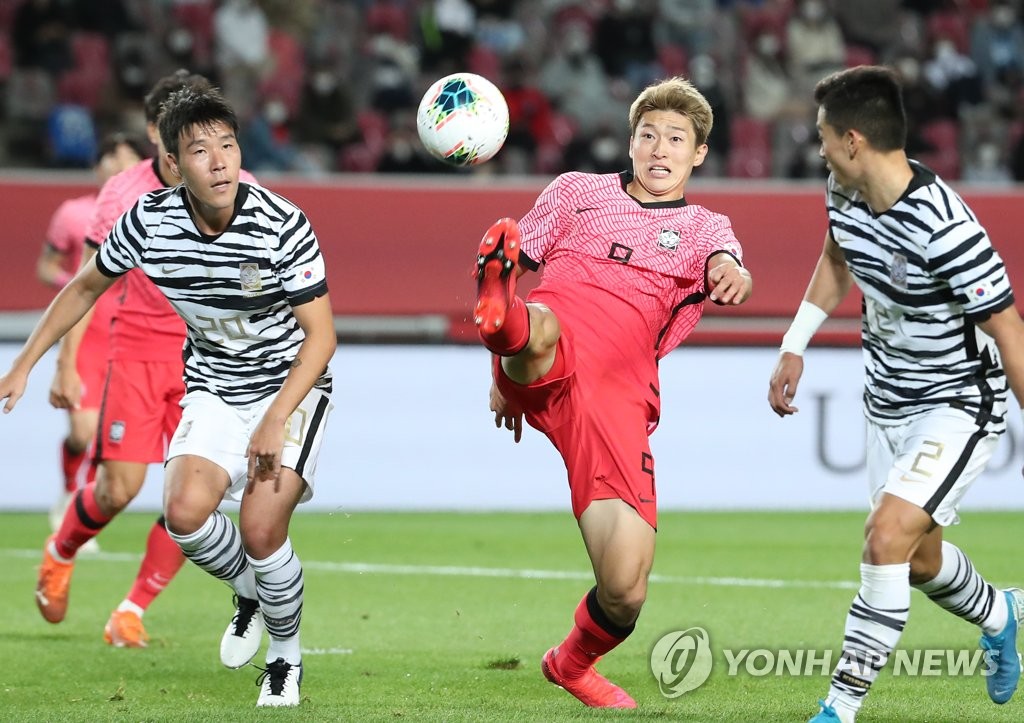 The losing coach Kim Hak-bum said his players weren't prepared for their battle Monday night, but one positive takeaway from the two exhibitions is that he got to see every one of his 23 players, including all three goalkeepers, in action.

"Even though we didn't score today, we did have a few chances and ran into a hot goalkeeper in Jo Hyeon-woo," Kim observed. "I think this should be a good learning experience for our young players."

Kim insisted that the competition is still very much on for places on his team for the Tokyo Olympics, postponed from this past summer to next July.

"These positional battles will go down the wire," he said. "I won't sit here and say which player has a chance to make the Olympics now. They will have to keep competing with one another." 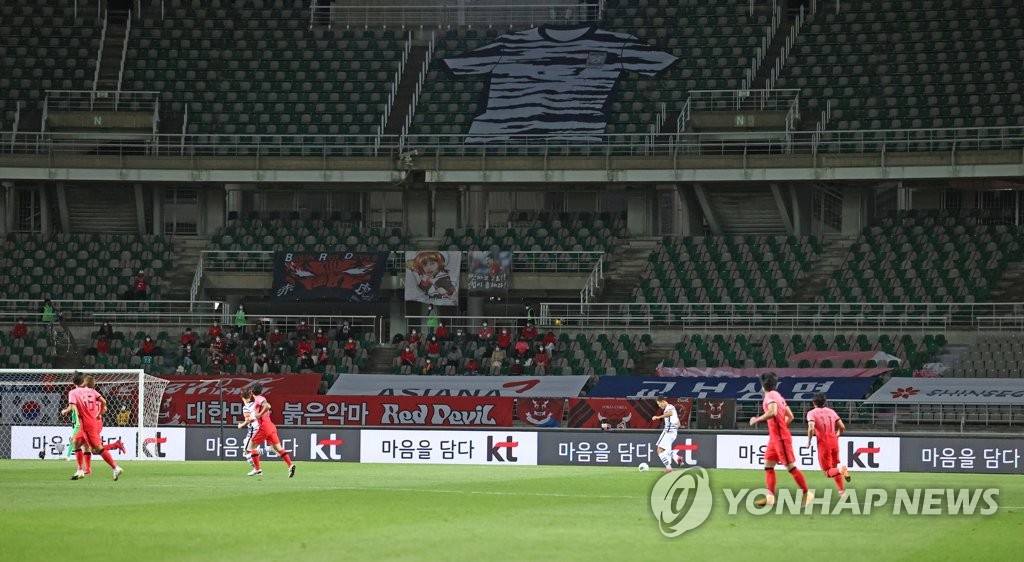 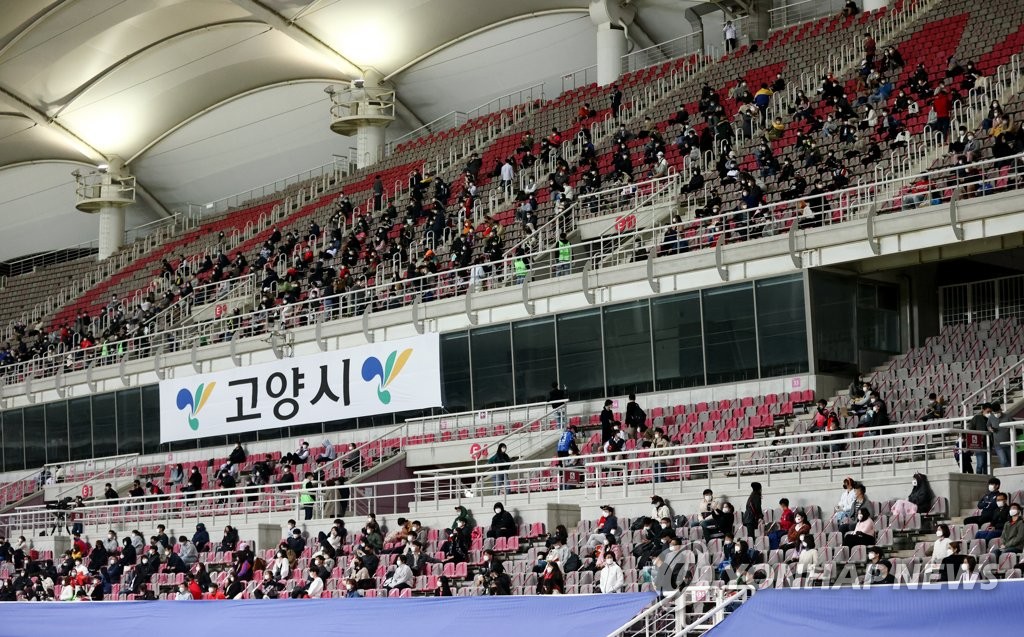