WASHINGTON, Oct. 12 (Yonhap) -- U.S. President Donald Trump on Monday picked North Korean leader Kim Jong-un as one of the world's "sharp" leaders, even after the North unveiled a massive new missile believed to be capable of striking any part of the United States.

"Look. We can't play games. The one thing I know for sure, President Xi of China ... President Putin of Russia. You look at around Kim Jong-un ... They are 100 percent sharp. We have somebody running who is not 100 percent," Trump said during a campaign rally in Florida, referring to his Democratic rival Joe Biden. 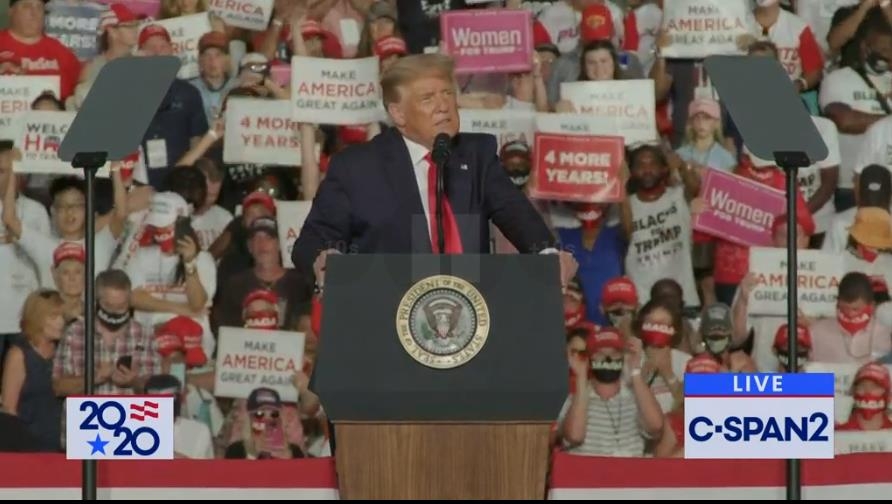 Trump has often grouped the three together as the "top chess players" or those at the top of their games.

Still, his latest remarks come just a few days after North Korea staged a massive military parade over the weekend and unveiled its newest intercontinental ballistic missile believed to be capable of reaching the entire U.S.

A U.S. administration official earlier said it was "disappointing" to see Pyongyang continue to prioritize its weapons programs despite leader Kim's 2018 agreement with Trump to denuclearize.

"The United States remains guided by the vision President Trump and Chairman Kim set forth in Singapore and calls on the DPRK to engage in sustained and substantive negotiations to achieve complete denuclearization," the official said earlier, referring to North Korea by its official name, the Democratic People's Republic of Korea (DPRK).

Trump and Kim held their first bilateral summit in Singapore in June 2018, followed by their second summit in Hanoi in February 2019. Their talks have stalled since the Hanoi summit ended without a deal.

Trump, returning to the campaign trail for the first time since falling ill with the new coronavirus about two weeks earlier, sought to take credit for preventing what he claims to have been an imminent war with the North.

"Whatever happened to the war we were supposed to be in with Kim Jong-un?" he said at the rally in Florida.