SEOUL, Oct. 13 (Yonhap) -- Eastar Jet Co. said Tuesday it will lay off more than half of its workforce this week as it strives to find a new investor after Jeju Air Co. scrapped its plan to acquire the smaller budget carrier amid the coronavirus pandemic.

Eastar plans to deliver pink slips to 605 of its 1,200 employees Wednesday before it begins the process of finding a new investor, Eastar Senior Vice President Kim You-sang said over the phone.

The company plans to maintain 590 employees, including cabin crew, which is the bare minimum to fly six planes. The size of the remaining workforce also is in line with the company's air operator certificate. 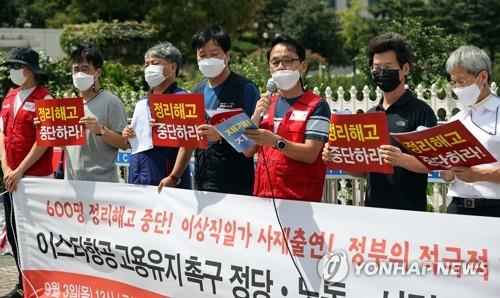 Eastar currently has 18 planes, including two 737 MAX aircraft, and had 1,680 employees as of March.

In August, Eastar selected a group of lead managers to resume a bid to sell a controlling stake of 51.17 percent.

Four strategic investors reportedly have shown an interest in making an investment in Eastar.

Eastar, which has suspended all flights since March, faces bankruptcy after Jeju Air scrapped the deal in late July due to the COVID-19 pandemic's growing impact on the airline industry.

Eastar to cut half of workforce to woo new investor

Eastar to cut half of workforce to woo new investor