SEOUL, Oct. 13 (Yonhap) -- Over 100 South Korean lawmakers have signed a joint letter protesting the city of Berlin's order to remove a statue symbolizing victims of Japan's wartime sexual slavery from the streets of the German capital, according to political parties Tuesday.

The letter, signed by 113 members of the ruling Democratic Party (DP), the minor progressive Justice Party, Basic Income Party, Transition Korea party and independent legislators, was delivered to the German embassy in South Korea on Tuesday.

Korea Verband, a Berlin-based civic group with South Korean ties, and its supporters set up the statue, formally called "The Statue of Peace," in a public place in Berlin's Mitte district last month to draw international attention to the issue of wartime sexual slavery victims. 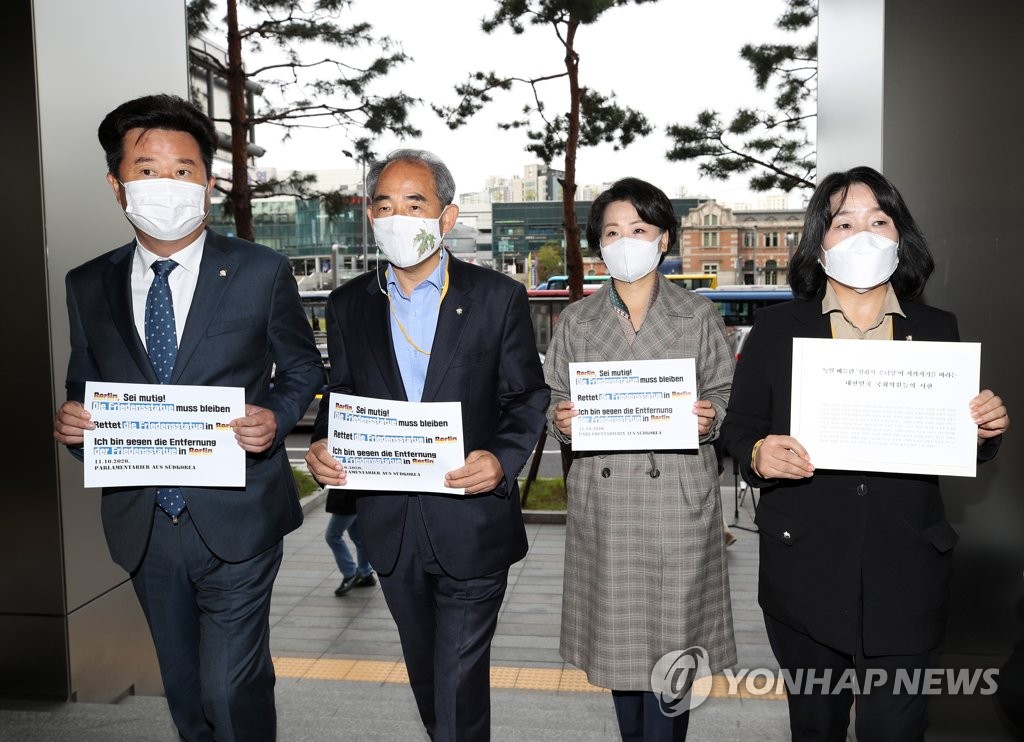 Nine days after its unveiling ceremony, however, the Mitte district office ordered Korea Verband to remove the statue by Oct. 14 after the Japanese government expressed regret over its installation. The district office threatened to forcibly execute its order if the removal is not finished by the deadline.

"It will be regretful if another case in the history of human rights abuse is written in Berlin," the letter said. "We express deep concern and regret."

The lawmakers also argued that the city's removal order was in effect representing the Japanese government's stance of denying historical wrongdoing and dodging international responsibility.

Peter Winkler, deputy head of mission at the German embassy, received a legislative delegation headed by DP Rep. Youn Mee-hyang at the embassy.

Winkler reportedly explained that the removal order was handed not by the German state government but by local city authorities. The diplomat also stressed the importance of freedom of expression and promised to deliver the letter to the German foreign ministry.

Historians say that around 200,000 Asian women, mostly Koreans, were forcibly sent to front-line brothels to provide sex services for Japanese soldiers during World War II. In the landmark 1993 Kono Statement of apology, Japan acknowledged for the first time that women were forcibly recruited into sexual slavery.
odissy@yna.co.kr
(END)