SEOUL, Oct. 14 (Yonhap) -- North Korea seems to have no appetite for provocation until after the U.S. presidential election in November, a foreign ministry official said Wednesday, citing "no explicit agitation" toward Washington during Pyongyang's recent military parade.

Park Jang-ho, deputy director-general at the foreign ministry's North Korean nuclear affairs bureau, made the remarks during a webinar hosted jointly by the Sejong Institute and Carnegie Endowment for International Peace.

"It seems to us that Pyongyang sort of intends to certainly wait and see the result of the U.S. election, and they have no appetite to make any provocation until then. But what happens after is something of interest to all of us," Park said. 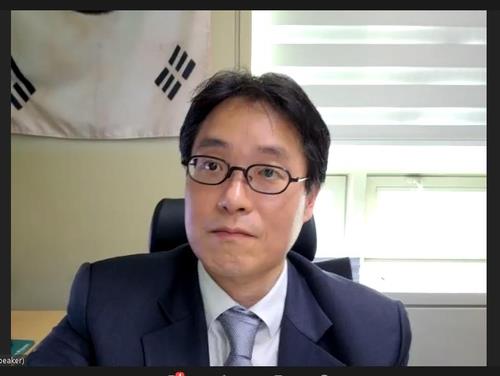 The diplomat called attention to Saturday's military parade in Pyongyang to mark the 75th anniversary of the founding of the ruling Workers' Party, where he said there wasn't clear agitation against Washington -- despite there being a showcase of a new intercontinental ballistic missile capable of hitting the U.S. mainland.

"Some of the more interesting things to note was that aside from somewhat positive connotation extended to the Seoul government, we should also note that in both Chairman Kim's speech and as part of the program, there was no explicit agitation toward ... targeting at Washington, which can be said to be unusual," he said.

Park also pointed out that "under no circumstances" would South Korea accept any provocation from the North.

"Simply looking at the long very long United Nations Security Council resolutions, which clearly reflect that kind of the unified resolve of the international community to not tolerate any further North Korean provocations, we certainly hope that our colleagues in Pyongyang should by now understand that point," he said.

Commenting on policy coordination between Seoul and Washington over North Korean nuclear diplomacy, Park underscored "top-notch lockstep coordination through many ups and downs."

"I can tell you that we have, myself and our team here in Seoul, have been extremely fortunate to have met and have worked with some of the finest and most capable team and colleagues in Washington," he said.

"Over the last weekend alone, we have maintained 24-hour, seven-day-a-week contact even in the midst of the COVID-19 situation. So I can tell you that at least between our two teams, there are no complaints on from here in Gwanghwamun or Foggy Bottom," he added.