INCHEON, Oct. 14 (Yonhap) -- A former United States Forces Korea (USFK) base in Incheon's Bupyeong district, just west of Seoul, was formally opened to the public in a ceremony on Wednesday following its return to the South Korean government last year.

The opening of parts of the former site of Camp Market to the public came 81 years after the area, about 25 kilometers from the capital, became an off-limits zone for use by the Japanese imperial army in 1939.

Incheon's municipal government held a ceremony on the site to mark the public opening of a 93,000-square-meter area that had previously housed a baseball field, a swimming pool and a theater of the 440,000-square-meter Camp Market.

Ordinary citizens are now allowed to freely enter the former Camp Market area from 9 a.m. to 5 p.m. every day.

The opening ceremony began after South Korean Vice Defense Minister Park Jae-min delivered the key to the main gate of Camp Market, which was acquired from the USFK, to Incheon Mayor Park Nam-choon.

Park walked into the former USFK base, together with about 100 dignitaries, including lawmakers of the ruling Democratic Party, to be greeted by a performance of Korean traditional music and a festival.

"We're thrilled to greet a glorious day like this. We have gathered the wisdom and strength of all citizens to regain Camp Market," the mayor said in an address. "We'll closely cooperate with the defense ministry and the USFK over the area's soil decontamination to ensure that all citizens can safely use the returned land," he stressed.

The former site of Camp Market was previously used as a weapon manufacturing factory of the Japanese military during Japan's colonial rule of the Korean Peninsula before being taken over by the U.S. military in 1945.

The Incheon government plans to map out measures to utilize the former Camp Market site by December next year.

The return is part of a broad relocation scheme to consolidate U.S. bases across the peninsula into two garrisons in Pyeongtaek, 70 km south of Seoul, and Daegu, with an aim to enhance defense readiness and operational efficiencies in the face of North Korean military threats. Currently, the USFK maintains some 28,500 troops in South Korea. 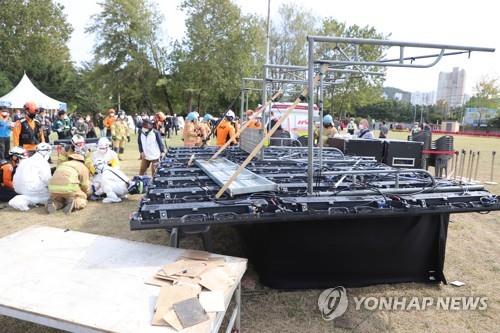 Meanwhile, an LED billboard installed for the opening ceremony of the former USFK base collapsed at 1:29 p.m., injuring six citizens, firefighters said.

One of them was seriously injured while five others sustained minor injuries, they said, adding all were rushed to the hospital.

The billboard measuring two meters in width and one meter in length was installed for use during the opening ceremony.

Former USFK base in Incheon returned to citizens after 81 years

Former USFK base in Incheon returned to citizens after 81 years