SEOUL, Oct. 14 (Yonhap) -- Local universities are coming increasingly under pressure to heed students' calls for partial tuition refunds over the poor quality of online lectures currently under way due to the protracted coronavirus outbreak.

Many universities' reluctance to offer tuition refunds also emerged as one of the hottest issues during the National Assembly's inspections of 12 education-related public institutions earlier this week, with lawmakers siding with students' calls for tuition reimbursement for the fall semester.

Lawmakers of both ruling and opposition parties generally leveled criticism at many domestic universities' lukewarm attitudes toward students' growing calls for tuition refunds and other financial assistance.

The global crisis caused by the novel coronavirus has triggered a major disruption in the way higher education institutions offer classes. As campuses have shut down and instruction is being offered remotely, there have been continuing complaints from students that online instruction is not a good value for the money. But a majority of universities argue that it is hard for them to cough up tuition, citing a rise in pandemic-related costs for setting up online classes and running disinfection and quarantine programs on campus. 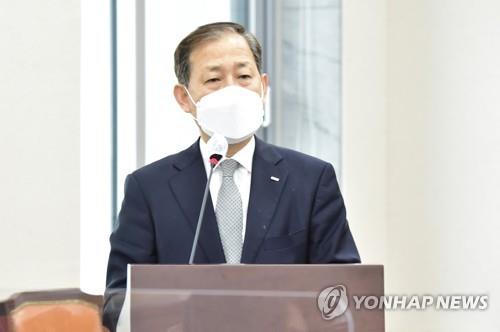 "Online classes are inevitable due to COVID-19, but the tuition fees have remained almost the same," Rep. Bae June-young of the main opposition People Power Party (PPP) said during an audit session on 12 education organization on Tuesday. "Students are in financial difficulties due to tuition fees for the fall semester, and their complaints are growing."

PPP Rep. Cho Kyoung-tae also pointed out that private universities, in particular, have been lukewarm about the rising calls for tuition reimbursement despite having huge reserve funds.

In response, Kim In-chul, the head of the Korean Council for University Education, said that his organization will try to find ways to help students facing economic hardships.

Kim, however, stressed that some 158 colleges and universities across the county have already taken measures to alleviate the burdens of students, such as partial tuition refunds and special scholarships.

Many universities are working to expand in-person classes beginning later this month, he added.

During the Tuesday audit, the state-run Korea Student Aid Foundation (KOSAF) was also grilled about its performance in arranging loans for financially strapped students.

Rep. Lee Tahney of the ruling Democratic Party (DP) criticized KOSAF for using most of its revenue, estimated at 50.6 billion won (US$44.2 million) in the 2015-19 period, to pay off its own debt, rather than lowering the interest burden for student borrowers.

Lee Joung-woo, the chief director of KOSAF, agreed to the lawmakers' request but noted that a comprehensive review is needed as there could be possible side effects.