SEOUL, Oct. 14 (Yonhap) -- A U.S. State Department spokeswoman on Wednesday thanked South Korean boy group BTS for their support for bilateral relations amid a backlash in China over comments made by the band's leader about the Korean War.

"Thank you BTS for your ongoing work supporting positive U.S.-ROK relations. You're very deserving of The Korea Society's General James A. Van Fleet Award," the spokeswoman, Morgan Ortagus, tweeted. "Music can bring the world together. Folks can learn more about the U.S.-ROK partnership by following U.S. Embassy Seoul."

ROK refers to the Republic of Korea, the official name of South Korea.

In her tweet, Ortagus linked to a tweet by U.S. Ambassador to South Korea Harry Harris, who congratulated the band on winning the award days ago.

Launched in 1995, the General James A. Van Fleet Award is given to those who contribute to the promotion of U.S.-Korea relations by the U.S.-based nonprofit organization The Korea Society. 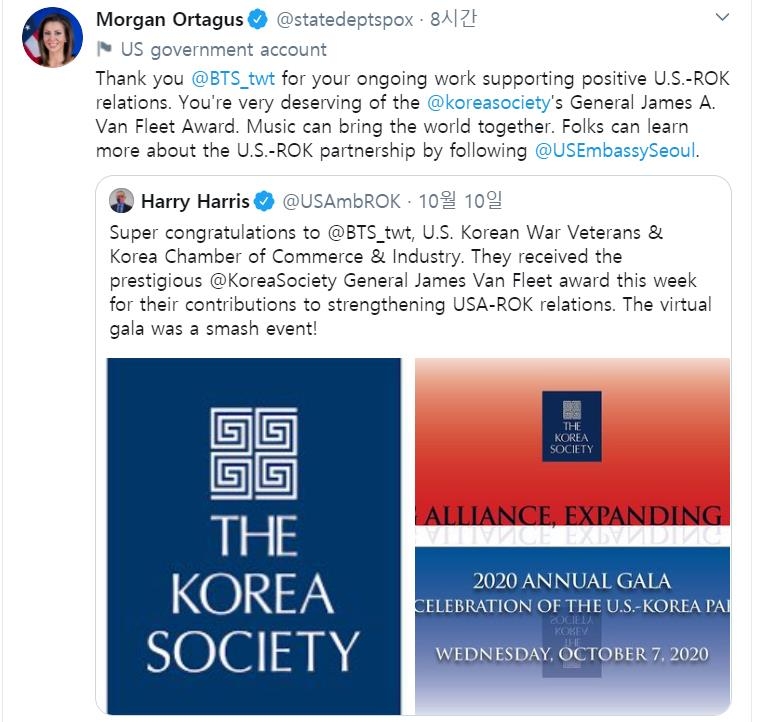 The U.S. official's message came as BTS has been facing outrage on social media in China after the boy band honored the sacrifices of South Koreans and Americans during the 1950-53 Korean War at the awarding ceremony on Oct. 7.

"We will always remember the history of pain that our two nations shared together and the sacrifice of countless men and women," BTS' leader RM said about the war that remains one of the most significant events in South Korea's modern history.

Chinese social media users said that the K-pop group looked down on the sacrifices of Chinese people who fought in the war on North Korea's side.

The Chinese backlash took a toll on South Korean companies, like Samsung Electronics and Hyundai Motor, which have removed BTS images from their products sold in China.