WASHINGTON, Oct. 14 (Yonhap) -- The defense chiefs of South Korea and the United States on Wednesday reaffirmed their efforts to transfer wartime operational control (OPCON) of South Korean troops back to South Korea.

"The Secretary and the Minister acknowledged that great progress had been made toward meeting the conditions for wartime OPCON transition through U.S.-ROK joint efforts," said the joint communique. ROK stands for South Korea's official name, the Republic of Korea. 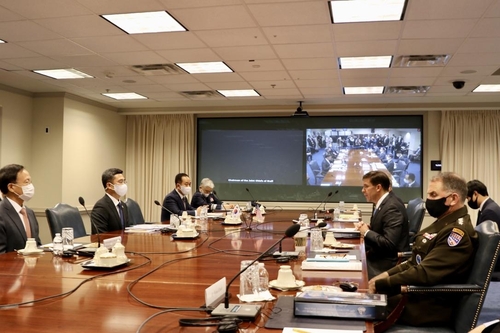 Suh said his country will continue to acquire the capabilities necessary to meet the requirements set by the countries' conditions-based transfer plans signed in 2015 and 2018, according to the statement.

Esper reaffirmed his country's commitment to providing the necessary supplements to Seoul's control and defense capabilities.

"Fully meeting all the conditions for the transition of operational control to a ROK commander will take time, but the process of doing so will strengthen our alliance," Esper said in his opening remarks.

South Korea is seeking to retake the wartime OPCON before the incumbent Moon Jae-in administration's five-year term ends in May 2022.South Korea regained peacetime OPCON in 1994.

South Korea and the United States mark the 70th anniversary of signing their bilateral military alliance this year. Wednesday's SCM marked the 52nd of its kind.

"The Secretary and the Minister assessed that the U.S.-ROK Alliance is strong and reaffirmed the two nations' mutual commitment to a combined defense as agreed in the U.S.-ROK Mutual Defense Treaty to defend the ROK," the joint statement said.

"Both sides pledged to continue to develop the Alliance -- the linchpin of peace and stability on the Korean Peninsula and in Northeast Asia -- in a mutually reinforcing and future-oriented manner," it added.

Suh and Esper agreed on the need to quickly conclude the countries' stalled negotiations to set South Korea's share in the cost of maintaining some 28,500 U.S. troops on the peninsula.

"The Secretary offered his appreciation for the ROK's contributions toward ensuring a stable stationing environment for U.S. forces in Korea while emphasizing the importance of defense cost-sharing," the statement said.

Seoul and Washington have held several rounds of negotiations for the so-called Special Measures Agreement (SMA) since late last year, but the talks currently remain deadlocked.

South Korea has offered to increase its annual share by up to 13 percent from the US$870 million paid under last year's agreement, but the U.S. is said to be demanding a 50 percent hike to $1.3 billion while U.S. President Donald Trump is reported to have initially demanded $5 billion per year from Seoul.

"I know we will have an open and candid discussion on this front. And I hope we will all agree on the necessity of reaching a Special Measures Agreement as soon as possible to ensure the stable stationing of U.S. forces on the Korean peninsula," Esper said at the start of Wednesday's meeting.

"The two sides concurred in the necessity of expeditiously resolving the SMA negotiations, in a fair, equitable, and mutually agreeable manner, particularly in light of the impact of the lapse on the ROK-U.S. Alliance," the released statement said. 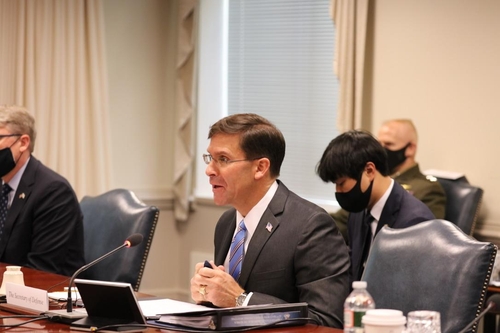 "In recognition of the significant threat that North Korea's nuclear and ballistic missile programs pose to international security, both sides reaffirmed the need for close coordination and cooperation to establish a permanent peace on the Korean Peninsula through complete denuclearization of the Democratic People's Republic of Korea (DPRK), as well as dismantlement of its ballistic missile program," said the statement, referring to North Korea by its official name.

The call came days after the communist state unveiled a new intercontinental ballistic missile at a military parade over the weekend that many believe may reach most of U.S. mainland.

Trump and Kim have held two more meetings since their Singapore summit in June 2018, but their talks have stalled since their second summit, held in Hanoi in February 2019, ended without a deal.

Suh and Esper underlined the importance of the countries' joint military exercises to ensure their defense readiness.

"The Secretary and the Minister reaffirmed the need to continue to conduct combined exercises and training events on the Peninsula to strengthen Alliance readiness," said the statement.

"The two leaders also emphasized that continuous training opportunities for USFK are critical to maintaining a strong combined defense posture," it added.