"He said that the division members and service personnel involved in the reconstruction campaign were always in his heart during the celebrations marking the founding anniversary of the glorious Party, and added that he missed them and he visited them to give encouragement to them," the KCNA said.

Kim also pointed out that he will deal strictly with cases of violation in the reconstruction efforts.

"According to a recent report, there occurred wicked and shameless violation of law of construction in which construction is done in a random way in a easy-going way," he said, adding that this issue will be strictly dealt with," it said.

North Korea's eastern province was one of the country's most damaged areas, hit by back-to-back typhoons in recent months.

Last month, Kim held a meeting of the Central Military Commission of the ruling Workers' Party to discuss recovery efforts under way in the typhoon-affected regions, and dispatched soldiers to help with recovery work there.

Kim also launched an "80-day campaign" last week to recover from flood damage and make as much progress as possible in the country's economic development project by year's end. 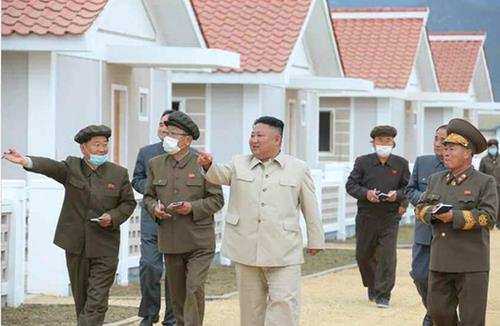