Big Hit shares opened at 270,000 won (US$236) on Thursday on the Korea Exchange and jumped by the daily upper limit of 30 percent to 351,000 won three minutes after market opening.

The stocks closed at 258,000 won, down 4.4 percent from the starting price.
Still, the closing price is a sharp hike from the initial public offering price of 135,000 won.

The company's high initial price may have triggered a selling spree for profit-taking, analysts said.

"We will uphold the stockholder's value in various terms by raising profitability, growth potential and contributions to society," Big Hit Entertainment Chairman and CEO Bang Si-hyuk said at the listing ceremony, which was livestreamed on YouTube. 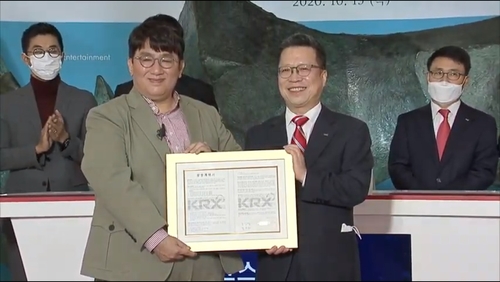 Bang holds a 36.6 percent stake in the company worth 3.14 trillion won based on the closing price, making him the sixth-richest person in South Korea.