SEOUL, Oct. 15 (Yonhap) -- In hopes of taking a major step toward ending a long title drought, the K League-leading Ulsan Hyundai FC will face the red-hot Pohang Steelers in a key weekend showdown.

Ulsan, whose last K League 1 championship came 15 years ago, are at the top of the table with 54 points, three ahead of Jeonbuk Hyundai Motors with three matches remaining. Pohang are a distant third with 44 points, but they're in the midst of a seven-match undefeated run, during which they've outscored opponents 18-9.

Pohang will host their third meeting of the season against Ulsan at 7 p.m. Sunday at Pohang Steel Yard in Pohang, 370 kilometers southeast of Seoul. Beat Pohang, and Ulsan would be set up nicely for the stretch drive toward the crown. But a loss Sunday would make things more interesting than they would like over the remaining two matches. 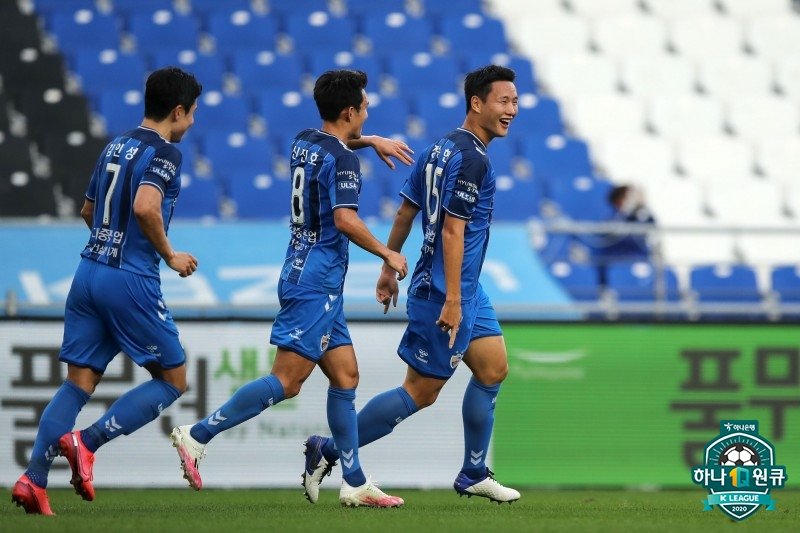 Ulsan and Pohang have clashed in some crucial moments in recent seasons, with Pohang often getting the upper hand. Last year, Pohang routed Ulsan 4-1 on the final day of the season, foiling Ulsan's bid for a title and allowing Jeonbuk to claim the trophy instead. In 2013, Pohang blanked Ulsan 1-0 in the season finale to finish one point ahead of Ulsan for the championship.

So far this year, Ulsan have had Pohang's number. They've won the first two meetings of the season, by 4-0 in June and 2-0 in August. Pohang have been held scoreless three times all season, and two of them were against Ulsan.

Pohang also did Ulsan a huge favor on Oct. 3, beating Jeonbuk 1-0 a day after Ulsan's 4-1 victory over Sangju Sangmu. These results allowed Ulsan to open up a three-point lead at the top.

Ulsan could be without two key players, midfielder Lee Chung-yong and fullback Hong Chul, who are both suffering from knee injuries. Their offense, which has produced a league-best 51 goals in 24 matches, will go as far as striker Junior Negrao takes them. The Brazilian forward leads all players this season with 25 goals. 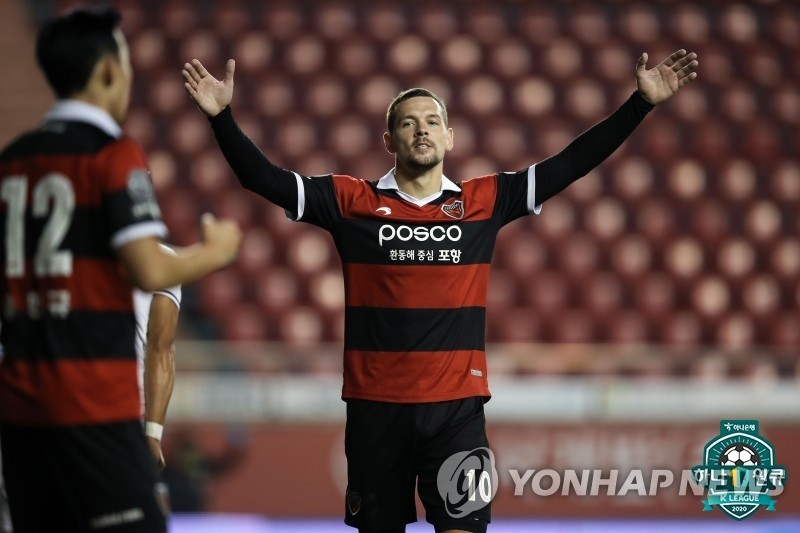 No one else on Ulsan has more than five goals. Pohang, on the other hand, have a more balanced attack. They're the only club this season to boast three players who've reached double figures in scoring -- Stanislav Iljutcenko (15), Aleksandar Palocevic (11) and Song Min-kyu (10).

Jeonbuk will have a winnable matchup at 4:30 p.m. Sunday against Gwangju FC, which are in sixth place at just 25 points. Gwangju did put up a valiant fight in their last meeting on Sept. 12, which ended in a 3-3 draw.

In the bottom half of the table, clubs will also be duking it out to avoid finishing in last place and getting relegated to the K League 2 next year. 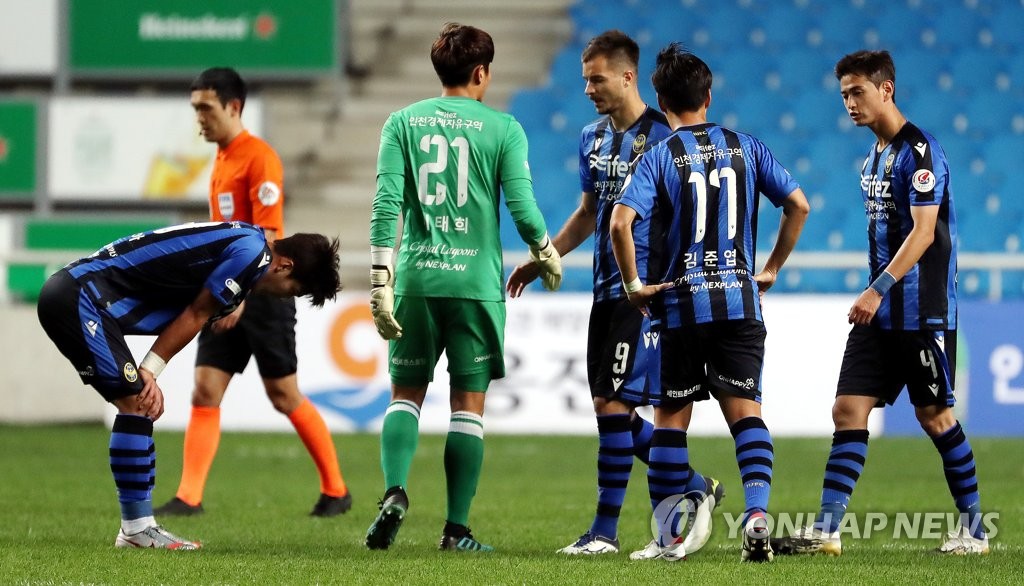 Incheon United, currently occupying the last spot with 21 points, will face Gangwon FC at 7 p.m. Friday. Incheon are just one point behind Seongnam FC, which will try to snap their four-game losing skid against FC Seoul at 4:30 p.m. Saturday.

Seongnam will be without head coach Kim Nam-il, who was ejected from his previous game after a heated argument with the referee and has been suspended for two matches. FC Seoul are on to their third coach this season already. Assistant Park Hyuk-soon is the interim boss, after the previous interim head coach, Kim Ho-young, resigned on Sept. 24, nine matches after replacing Choi Yong-soo. 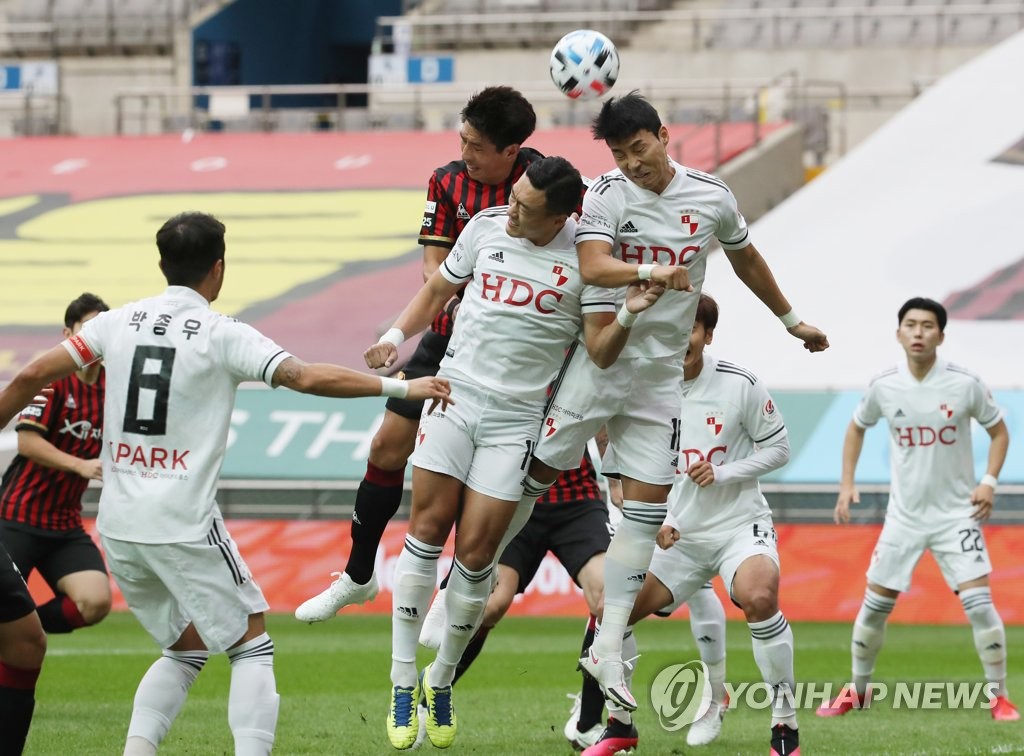