According to police officials, Seoul's Jongno Police Station has notified the "August 15 emergency civic response committee" of its decision not to permit its Gwanghwamun rallies planned for Sunday and Oct. 25, citing risks of coronavirus transmissions.

The civic group has vowed to hold outdoor rallies of about 1,000 people each on the two Sundays in the form of worship services. The group said it will set up 1,000 chairs, 2 meters apart from each other, in a 400-meter section comprising sidewalks and three traffic lanes, north of the Sejong Center for the Performing Arts. 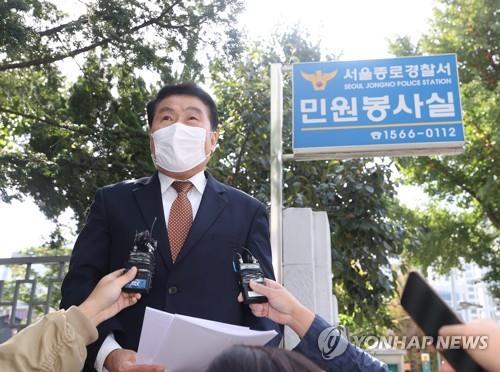 But the Seoul metropolitan government has said it will prohibit such rallies to help prevent the spread of COVID-19. Following the Seoul government's decision, police have also slapped a ban on them.

The same civic group, which organized a massive anti-government demonstration on and around Gwanghwamun Square on the Aug. 15 Liberation Day, has vowed to stand up against "oppressive policies" of the Moon government. But its subsequent bids to repeat such downtown rallies on National Foundation Day on Oct. 3 and Hangeul Day (Korean alphabet) last Friday failed in the face of a police blockade of Gwanghwamun Square.

Earlier this week, the South Korean government lowered social distancing guidelines from Level 2 to the lowest tier of Level 1, allowing outdoor rallies of fewer than 100 people. But the Seoul city government said it will maintain its ban on rallies in downtown areas, including Gwanghwamun Square.

Choi In-sik, secretary general of the civic group, said his group will seek to mobilize all possible legal means to overturn the rally ban by police and the Seoul government.

"If any administrative measure is taken against rallies, our group will do everything legally possible, such as filing an administrative lawsuit or an application for an injunction against a rally ban, on the basis of people's opinions," Choi told reporters earlier this week.