SEJONG, Oct. 15 (Yonhap) -- The number of people aged 65 or older in South Korea is expected to account for 30 percent of the population in 2035, a report showed Thursday, highlighting concerns that the fast-aging demographic transition could pose a drag on the country's economy.

According to the report by Statistics Korea, the number of people aged 65 or older stood at 8.03 million this year, accounting for 16.1 percent of the nation's population.

The South Korean population is projected to peak in 2028 before going on a downward curve, the report showed.

However, the graying of South Korea will accelerate, with the number of elderly people rising to 10 million in 2025 and 15 million in 2036.

In 2035, the number of elderly people is expected to stand at 15.24 million, accounting for 29.5 percent of the population.

The number of elderly people is forecast to grow to 17.22 million in 2040, accounting for 33.9 percent of the population, according to the report.

The fast-aging population, coupled with record low birth rates, could become a burden on the nation's finances as the cost of health and welfare services for senior citizens increase.

The development comes as some young South Koreans are opting to distance themselves from life's three major milestones -- dating, marriage and having children -- because they cannot find decent jobs amid a prolonged economic slowdown.

The number of economically active population is expected to drop by 8.71 million people by 2040, the report showed. 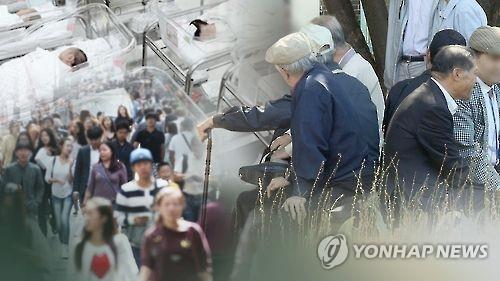