SEOUL, Oct. 15 (Yonhap) -- The top court on Thursday upheld a one-year prison term for a former chief of staff to ex-President Park Geun-hye, who was indicted on charges of abusing his power to illegally support conservative groups.

Kim Ki-choon, who served as Park's chief of staff from 2013-2015, is accused of pressuring the Federation of Korean Industries, a business lobby group, into getting firms to provide 2.4 billion won (US$2.1 million) to 21 organizations favorable to the administration at the time.

The lower courts had sentenced Kim to a 18-month prison term on charges of abuse of power and extortion, but the Supreme Court sent the case back to the appellate court after dismissing the extortion charge in Feburary.

The top court said at the time that requesting FKI records on assistance to conservative groups did not constitute a restriction of the freedom of choice.

In June, the appeals court reduced Kim's sentence to a year in a retrial, but Kim again appealed.

Kim has not been detained as he served more than a year in prison after being convicted in separate cases, including for drafting a blacklist of artists critical of the then Park government. 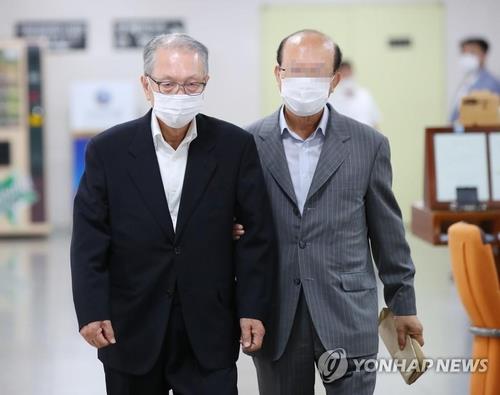