SEOUL, Oct. 15 (Yonhap) -- The resumption of a civilian tour program to the inter-Korean border village of Panmunjom is likely to be announced as early as next week, a unification ministry official said Thursday.

Since September last year, tours to the Joint Security Area (JSA) and other sites inside the Demilitarized Zone (DMZ) have been suspended as part of an effort to stem the spread of the highly contagious African swine fever.

"We are in the final stages of coordinating the resumption of the Panmunjom tour amid eased coronavirus guidelines," the official said.

"I believe there will be an announcement as early as next week regarding the resumption," he said.

He added that the newly reported cases of African swine fever in the northeastern county of Hwacheon are unlikely to hinder the reopening of the tours, saying they were "found in a distant area from Panmunjom."

Earlier this month, the U.S.-led UNC said it had authorized the resumption of the tour program on eased concerns over the contagious animal disease, with the exact date of the reopening to be announced soon. 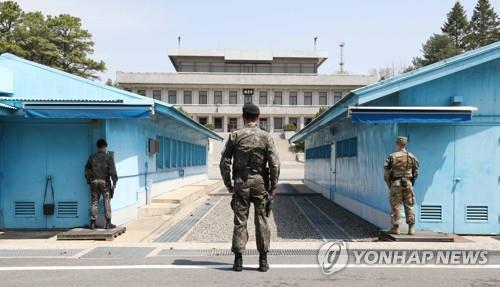