SEOUL, Oct. 15 (Yonhap) -- The abrupt cancellation of a planned joint press conference between the South Korean and U.S. defense chiefs was not because of differences between the two sides but because of "internal issues" of the United States, the defense ministry said Thursday.

South Korean Defense Minister Suh Wook and U.S. Defense Secretary Mark Esper had been scheduled to hold a news conference in Washington on Thursday after the annual ministerial talks, the Security Consultative Meeting (SCM). Suh flew to the U.S. for the meeting Wednesday amid the new coronavirus.

But reporters were told about the cancellation just hours before it was supposed to happen, which sparked speculation that the two sides have revealed wide differences on major issues during the meeting, such as the transfer of the wartime operational control (OPCON) and the defense cost-sharing deal.

"The U.S. side asked for our understanding citing its circumstances, and we accepted that. The cancellation is not because of any differences between the two sides," deputy spokesperson of Seoul's defense ministry Col. Moon Hong-sik told a regular briefing. He refused to elaborate further, citing diplomatic protocol.

The South Korean delegation received the request from the U.S. after arriving in Washington on Tuesday (local time), another official said, adding that the U.S. noted that Esper has not held any joint press briefing with foreign counterparts since August.

"We've raised a question about the request, but the U.S. gave us detailed explanations," the official said. "It was because of the U.S.' internal issues, and we also had full discussions of our own."

The official declined to elaborate on what those "internal issues" are.

The 52nd SCM was held less than three weeks ahead of the U.S. presidential election, and Seoul and Washington face an array of sensitive issues, such as North Korea's new intercontinental ballistic missile (ICBM) and how to share burdens for the upkeep of American soldiers on Korean soil.

During the meeting, Suh and Esper revealed some differences on the envisioned OPCON transfer.

At the start of the meeting, Esper said it will take time to meet required conditions for the transition, while Suh said that the two sides will work together to get prepared by meeting the conditions at an early date.

The transition is not time-based but conditions-based, though the current Moon Jae-in administration hopes to achieve it within his term that ends on May 2022.

The right conditions are South Korea's capabilities to lead the allies' combined defense mechanism, its capacity for initial responses to the North's nuclear and missile threats, and a stable security environment on the peninsula and in the region.

Due to the virus pandemic, the two sides were unable to fully carry out a Full Operational Capability (FOC) test as scheduled this year, which is meant to check if Seoul is on course to meet conditions for the transition.

Their joint communique said that Seoul and Washington noted progress and discussed ways for the FOC certification and other necessary procedures, but it stopped short of mentioning detailed plans for a full FOC test and the subsequent full mission capability (FMC) test.

"We've yet to reach a conclusion. The two sides share the need for additional discussions," another Seoul official said.

Suh was to return home Thursday. 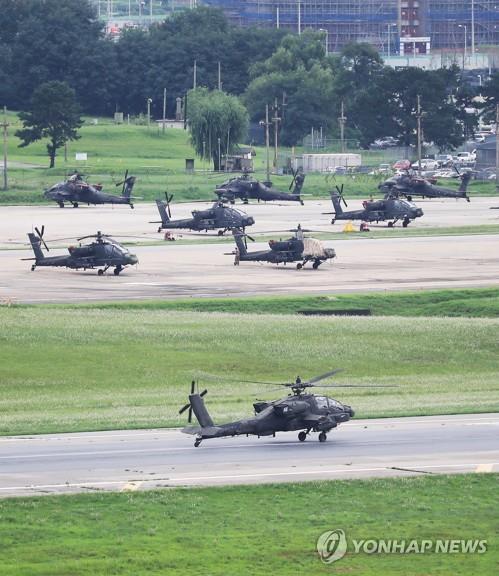