SEOUL, Oct. 15 (Yonhap) -- A new submarine-launched ballistic missile (SLBM) that North Korea unveiled last week is believed to be labeled "Pukguksong-4ㅅ," featuring a Korean letter, not "Pukguksong-4A," which indicates that it is a sea-based system.

On Saturday, the communist country unveiled a new SLBM during a massive military parade held in Pyongyang to mark the 75th anniversary of the founding of its Workers' Party, along with a new intercontinental ballistic missile (ICBM) and other advanced conventional weaponry.

Asked about the military's analysis of the new system, Navy Chief of Staff Boo Suk-jong said that the name inscribed on the missile includes "ㅅ," a consonant of the Korean alphabet, rather than the English letter "A," to mark that it is designed to be launched from the water.

In Korean, the word meaning "for use in water," starts with that character.

North Korea has three types of Pukguksong missiles, and Pukguksong-2 is a ground-based one, not an SLBM. As the upgraded version of the Pukguksong-1, the Pukguksong-3 SLBM is believed to have a flight range of 2,000 kilometers or longer, and the regime last carried out a flight test of the weapon in October 2019. 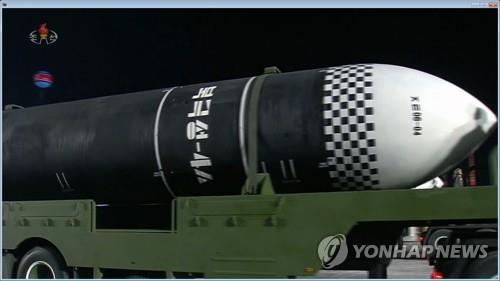