(ATTN: UPDATES with reports of a Washington meeting between South Korean and U.S. diplomats in last 4 paras: ADDS photo)
By Byun Duk-kun

WASHINGTON, Oct. 15 (Yonhap) -- The U.S. National Security Council (NSC) reemphasized the importance of the U.S.-South Korea alliance Thursday, saying the partnership remains vital to peace and stability on the Korean Peninsula and its region.

The renewed focus on the 70-year-old alliance follows controversial remarks from the Asian ally's top diplomat here that 70 years of the alliance does not mandate his country to make the same choice for the next seven decades.

"Alongside our Korean Allies, 36,000 Americans gave their lives to defeat the expansion of communism on the Peninsula. Our relationship, forged in war and reinforced by friendship and a shared love of liberty, is vital to peace and stability in both Asia & the world," it said in a twitter message with a hashtag "We go together," written in Korean. 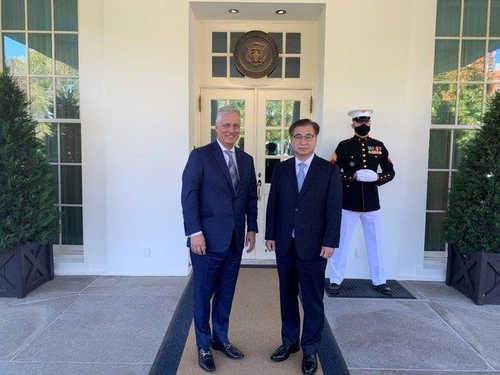 The NSC's tweet came a day after the allies held their annual defense ministerial talks, known as the Security Consultative Meeting, here in Washington.

Still, the tweet also follows the controversial remarks from South Korean Amb. Lee Soo-hyuck, made on Monday when Lee and his embassy underwent a virtual parliamentary audit.

The embassy later explained that Lee had sought to highlight the importance of the alliance by pointing out that it remains robust "not only because of the promise made 70 years ago, but because of its firm foundation" based on common interests and shared values.

The U.S. State Department responded with a statement saying it stands "extremely proud" of the Korea-U.S. alliance, and that the countries continue to work together as allies and friends to meet new challenges.

South Korea's top security adviser, Suh Hoon, arrived here the day after Lee made his remarks on what South Korea's presidential office described as a mission to strengthen the strategic communication between the countries' national security councils.

Suh met with his U.S. counterpart, National Security Adviser Robert O'Brien, on Wednesday and is set to hold talks with Secretary of State Mike Pompeo later in the day.

The South Korean national security adviser is set to head home on Friday after also meeting with other officials from the U.S. government and major think tanks here. 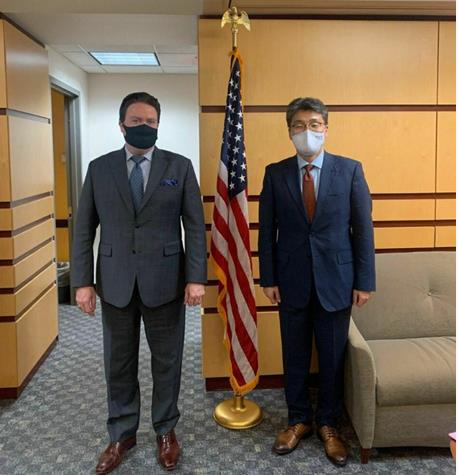 A ranking South Korean diplomat is also on a visit to Washington, according to the Korean embassy here.

"In his meeting with Deputy Assistant Secretary Knapper, (Ko) reaffirmed the firmness of the South Korea-U.S. alliance, which is the linchpin of regional peace and security, while discussing the countries' bilateral ongoing cooperation in the Indo-Pacific region," the foreign ministry said in a press release distributed by the Korean embassy here.

"Also, in meetings with Congressional officials and experts from think tanks, Ko exchanged views on the U.S. presidential election and promised to further strengthen the South Korea-U.S. alliance through close communication between the two countries," it added.