WASHINGTON, Oct. 15 (Yonhap) -- There exists no difference of opinion between South Korea and the United States on the need to formally end the Korean War as part of the process to denuclearize North Korea, South Korea's national security adviser said, adding it is "common sense" that the two issues go together.

Suh Hoon, director of South Korea's National Security Office, said the only issue was when a declaration of the war's end could or should be made.

"The issue of declaring the war's end is not a new issue. It has always been on the negotiating table and there can be no different views regarding the issue between South Korea and the U.S.," Suh told reporters after his meeting with U.S. Secretary of State Mike Pompeo. 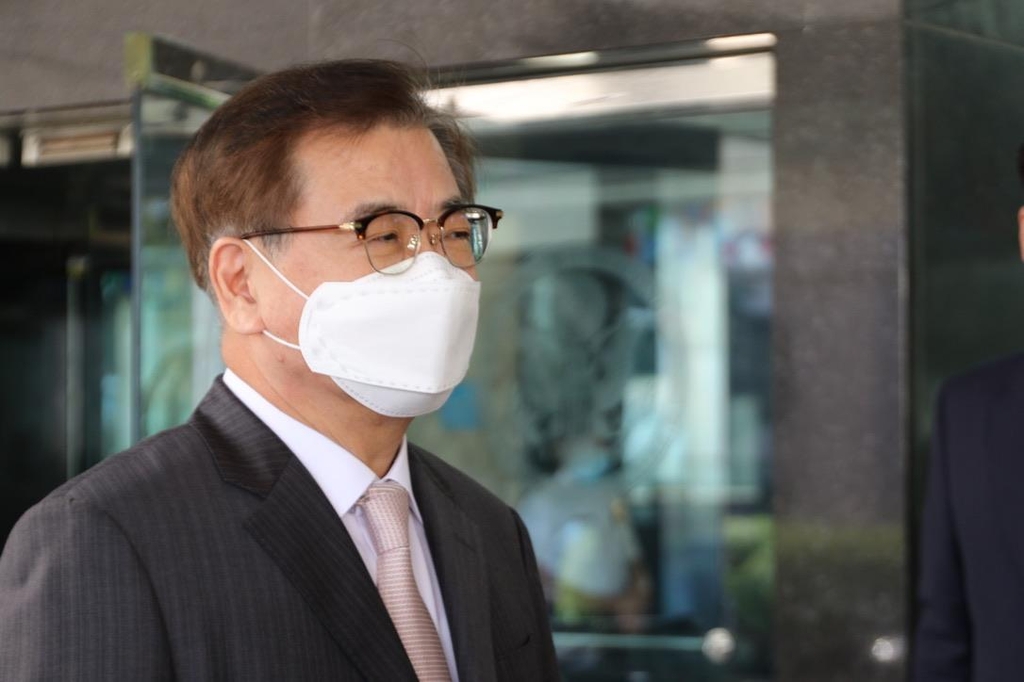 The South Korean official arrived here Tuesday on a four-day visit that the presidential office Cheong Wa Dae said was aimed at enhancing the South Korea-U.S. alliance through close communication between the countries' national security councils.

Moon said the move would help restart the stalled negotiations on ridding North Korea of its nuclear weapons program by partly providing a security guarantee it has long sought.

South and North Korea technically remain at war as the Korean War ended only with an armistice and not a peace treaty.

Some have claimed Seoul seeks to declare the war's end regardless of progress in the North's denuclearization process.

"The (remaining) issue is when the declaration of the war's end may come in the (North Korea's) denuclearization process, or how closely it would be linked to denuclearization," Suh told reporters, dismissing such claims.

"So you may understand that it is common sense that the declaration of the war's end cannot be dealt with separately (from denuclearization)."

Suh also dismissed claims that Seoul alone may seek to declare the war's end, saying such a declaration, along with other inter-Korean issues, would need the support of the United States and others.

"Inter-Korean relations cannot be said to be a relationship between only the South and the North. Every issue is an issue that needs to be discussed, coordinated and conducted together with the United States and neighboring countries," he said. 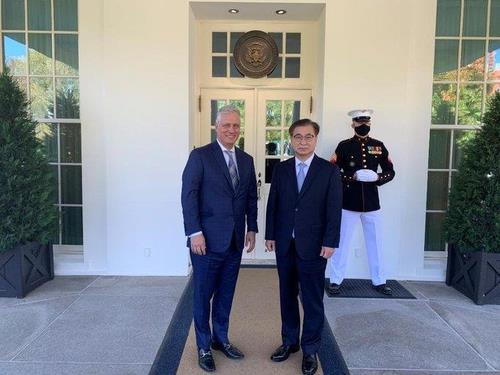 Suh said he had productive discussions on other wide range of bilateral issues.

"I had very useful discussions with National Security Adviser O'Brien and Secretary Pompeo. We shared our evaluations of conditions on the Korean Peninsula and views on ways to manage the conditions, and also held productive discussions on a broad range of bilateral issues," he said.

Suh's U.S. trip, first of its kind since he was named the national security adviser in July, was previously unannounced, prompting speculation that he may be on a mission to mend ties between Seoul and Washington soured by controversial remarks from South Korea's ambassador to the United States.

While undergoing a virtual parliamentary audit on Monday, South Korean Amb. Lee Soo-hyuck said just because his country chose the U.S. as its ally 70 years ago, it is not mandated to make the same choice for the next 70 years.

The South Korean embassy later explained the ambassador had only meant to highlight the strength of the South Korea-U.S. alliance by pointing out that it continues to remain strong even after 70 years based on the countries' shared values.

"Most fundamentally, I believe there has been progress in reaffirming and reaching a mutual understanding on how strong the South Korea-U.S. alliance is being maintained," Suh said of his meetings with his U.S. counterparts.

The national security adviser said he did not have any serious discussions on the issue of burden-sharing with his U.S. counterparts, but that his country will continue to discuss the issue for an early conclusion of negotiations at a "reasonable" and "mutually acceptable level."

Seoul and Washington have held several rounds of the so-called Special Measures Agreement talks, which will set South Korea's share in the cost of maintaining some 28,500 U.S. troops in South Korea, but have yet to reach an agreement.

South Korea has offered to increase its burden-sharing by up to 13 percent from teh US$870 million it paid under last year's agreement, but the U.S. is reportedly demanding a 50 percent hike to $1.3 billion a year.