BUSAN, Oct. 16 (Yonhap) -- Five more people have been diagnosed with COVID-19 at a hospital specializing in senior care in Busan, authorities said Friday, raising the tally from the southern port city's largest coronavirus cluster to 58.

The five new cases -- three patients and two workers at the Haeddeurak Hospital in the city's northern neighborhood of Mandeok -- have been discovered in a reexamination of the facility's 198 patients and staff members, according to the city's health officials.

The hospital, used mostly by seniors, emerged as the city's largest-ever cluster of coronavirus infections Wednesday, when it reported 53 cases from among its patients and workers.

Two of the infected patients have already died. 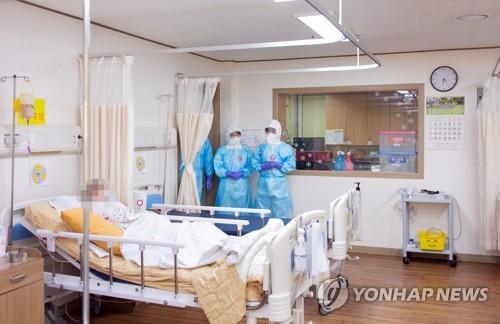 All 265 patients and workers of the hospital were initially tested early this week after an assistant nurse in her 50s was confirmed to be infected Tuesday. The nurse reportedly developed a fever last Thursday after coming in contact with one of the deceased patients. The hospital has since been put under cohort isolation.

The five new patients had all tested negative in their initial coronavirus tests, they said, fearing more cases are likely to be identified in additional tests.

Meanwhile, the municipality of Busan has administered coronavirus tests to all 1,880 patients and workers at seven other facilities for senior health care in Buk Ward, to which the Mandeok neighborhood belongs, but all results are negative, officials said.

Busan, South Korea's second-largest city with a population of 3.4 million, has so far reported 547 coronavirus cases and six deaths from the disease.