SEOUL, Oct. 16 (Yonhap) -- The prosecution said Friday it raided a few businesses and a state agency in connection with its investigation into a financial fraud scandal at a private equity investment company.

The Seoul Central District Prosecutors Office raided a regional branch of the Korea Communications Agency (KCA) in Incheon, the headquarters of Daishin Securities in central Seoul and Gangnam N Tower in southern Seoul to secure materials related to the allegations that the state agency was lobbied by Optimus Asset Management, which is embroiled in a massive fund scam scandal.

The private equity firm has been investigated on allegations that it solicited funds worth hundreds of billions of won from investors by promising a high return of 2.8-3.2 percent and claiming the money would be invested in safe receivables of state-run companies.

Since June 17, the total amount of customers' money that couldn't be withdrawn from the company's funds has surpassed 500 billion won (US$436 million), as the company suspended withdrawals due to liquidity problems. 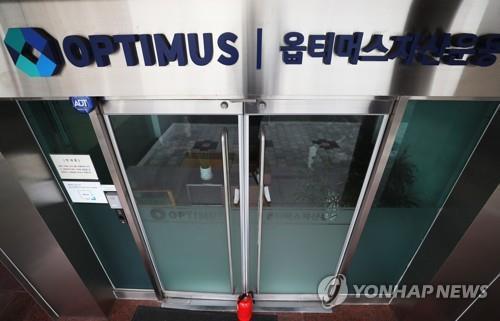 Persecutors are said to have secured a testimony from a person familiar with the matter of kickbacks paid by Jeng Yeung-jea, former president of the alternative investment division of Optimus, to an official, who is now working as president of the agency's Gyeonggi and Incheon branch, to secure an investment from the agency.

The agency invested some 106 billion won from June 2017 to March 2018 in Optimus, but later retracted it after the investment was ruled against its internal regulations. Of the investment, some 83 billion won was invested through Daishin Securities, which was the first brokerage company that started to sell Optimus fund products to the public.

Prosecutors were said to be looking into how the brokerage company initially began selling Optimus products.

Gangnam N Tower is where three companies, including Trust All, a real estate company, were registered as businesses. The prosecution suspect some of Optimus money went to the companies.

President Moon Jae-in ordered a thorough investigation into the scandal and asked the authorities to examine how several state-run agencies, including the KCA and the Korea Racing Authority, have come to allegedly invest in the asset company, Cheong Wa Dae spokesman Kang Min-seok said.