SEOUL, Oct. 18 (Yonhap) -- The PGA Tour tournament CJ Cup will return to South Korea next year, after being staged in the United States during the pandemic-interrupted 2020-2021 season.

The PGA Tour and the CJ Group announced Sunday that the tournament, which was inaugurated in 2017 as the only PGA event in South Korea, will be played at Haesley Nine Bridges Golf Club in Yeoju, 105 kilometers southeast of Seoul, next year.

The tournament is currently being played at Shadow Creek Golf Course in Las Vegas. It was scheduled to be played on the Korean southern resort island of Jeju for the fourth straight October. But travel restrictions brought on by the coronavirus pandemic forced the tour and the title sponsor to temporarily relocate the tournament to Nevada. 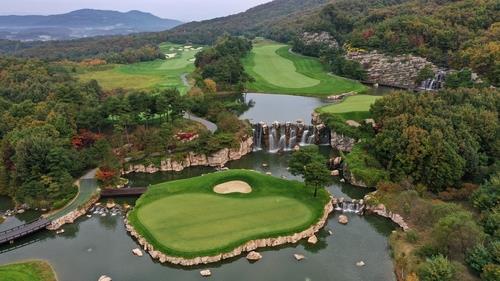 In a statement, CJ Group said the 2021 tournament, should it be open to fans, is likely to draw a bigger crowd than in the past, given the new course's proximity to Seoul. The three years in Jeju attracted over 40,000 fans.

The group added that staying close to the capital city will present a greater number of corporate partners with more marketing opportunities and also help the local economy in the process.

PGA tournament CJ Cup to return to S. Korea in 2021

PGA tournament CJ Cup to return to S. Korea in 2021