SEOUL, Oct. 19 (Yonhap) -- South Korea's national debt is expected to soar over the next four years, which may have a negative impact on the country's creditworthiness, a report said Monday.

In particular, Seoul's interest-bearing state debt is likely to rocket nearly 78 percent over the period based on the government's 2020-24 fiscal management plan, the report from the Korea Institute of Public Finance (KIPF) said.

According to the government plan, South Korea's debt that has to be repaid with tax revenues is forecast to reach 899.5 trillion won (US$785 billion) in 2024, up 77.5 percent from this year's estimate of 506.9 trillion won.

The surge is forecast to result from fast-rising fiscal expenditures to expand social safety nets amid the protracted coronavirus pandemic and finance welfare programs. 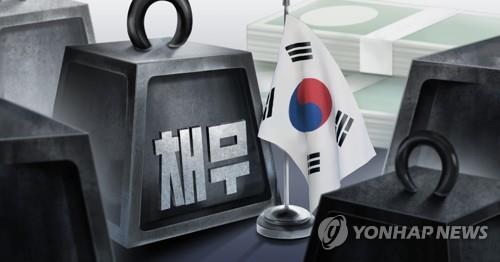 "The mid-term government growth estimate for interest-bearing national debt is deemed steep even though the current coronavirus-induced situation is factored in," said Kim Woo-hyun, a KIPF researcher who authored the report.

He voiced concern that a surge in South Korea's national debt could lead to a downgrade of its sovereign credit rating.

The researcher cited a separate report claiming that a 30 percent rise in a country's national debt could result in a one-notch fall in its sovereign credit rating.

S. Korea's national debt to jump over next 4 years: report

S. Korea's national debt to jump over next 4 years: report