JEJU, South Korea, Oct. 19 (Yonhap) -- A Jeju Island woman, who recently caused a stir in Korean society after offering to sell her newborn baby for 200,000 won (US$175) in a mobile secondhand marketplace, has deeply repented for her wrongdoing, police said Monday.

Jeju's provincial police agency, investigating the unprecedented case, said it has conducted a preliminary questioning of the single woman in her 20s and concluded that she appears to have uploaded the controversial post out of her physical and emotional difficulties after giving birth to the baby following an unwanted pregnancy.

The woman has sincerely expressed remorse, police said, noting she had immediately deleted her online post after realizing her behavior was wrong.

The case started Friday, when the woman uploaded two photos of her newborn baby on the cyber marketplace, saying a 36-week-old baby is available for adoption for the price of 200,000 won.

The shocking post immediately went viral on local online communities, prompting police to launch an investigation for her possible violation of the Child Welfare Act.

According to police, the woman gave birth at an ob-gyn clinic in the city of Jeju last Tuesday before uploading her online post at a postnatal care center in the same city three days later.

"She said she got angry after learning that the adoption process is difficult and takes a long time. But we're also approaching the case with her emotional and economic difficulties in mind," said a police official, noting she has no job and the father is not in the condition to raise a baby.

Her parents also live in Jeju but are not in a situation to extend any helping hand, the official said.

Police said they will further question the woman after she leaves the prenatal care center. She reportedly plans to enter a single mothers facility after being discharged from the center.

Separately from the probe, police said they will seek ways to financially help the women and her baby through cooperation from relevant public institutions. 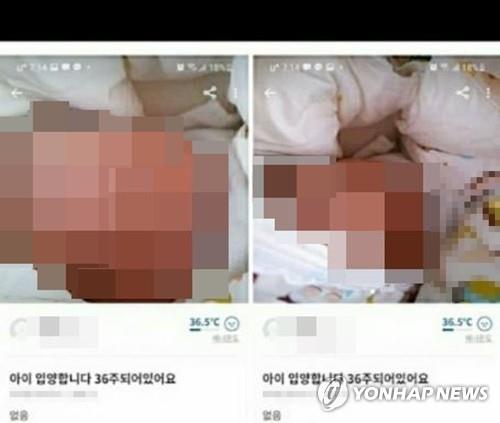