The 36-year-old worker, whose surname was Kim and worked at a company branch in the central Seoul ward of Dongdaemun, was found dead at his home Monday last week, according to the civic task force working for the rights of delivery workers.

This year alone, 10 parcel delivery workers have died in cases believed to be related to overwork, according to the group, as the new coronavirus outbreak triggered a surge in online shopping and parcel volumes. 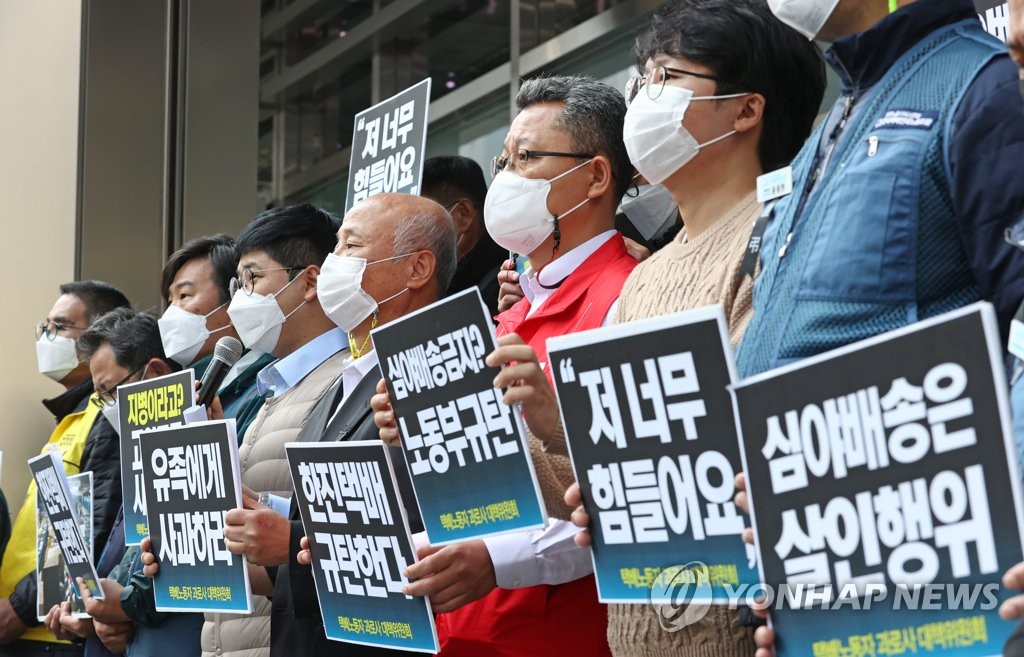 The group claimed that Kim's passing was "undoubtedly" also caused by overwork.

"He was relatively young, at the age of 36, and we confirmed that he had no prior health issues," it said.

The task force disclosed a text message that he sent to his superior four days prior to his passing. In it, the worker asked for a reduction of work amid an apparently strenuous work schedule and a lack of time to rest and recharge.

"It's 5 (a.m.) when I return home. After I eat, clean up and go straight back to the (company) terminal, I have to sort parcels again without any sleep whatsoever," the message read.

The company, a division of South Korean transportation Hanjin Group, which owns air carrier Korean Air, has reportedly claimed that Kim had underlying health issues and that his delivery load was around 200 parcels per day, below the supposed industry average.

The workers' group, however, argued that Kim's daily load ranged between 200 and 300 packages during the week prior to the fall harvest holiday of Chuseok.

The group also explained that the travel coverage of Hanjin Express workers in delivering 200 parcels matched that of the 300 to 400 deliveries by workers at industry leader CJ Logistics. This is due to the fact that dedicated delivery areas handled by individual Hanjin workers were much larger when compared with CJ, it explained.

The task force held a press conference in front of Hanjin Express headquarters in central Seoul to demand an apology and measures to protect the rights and health of delivery workers.

A 2018 report by the Korea Transport Institute showed that delivery drivers worked 12.7 hours a day, 25.6 days each month on average. This translates to much longer working hours compared with the 52-hour workweek scheme mandated by the government. 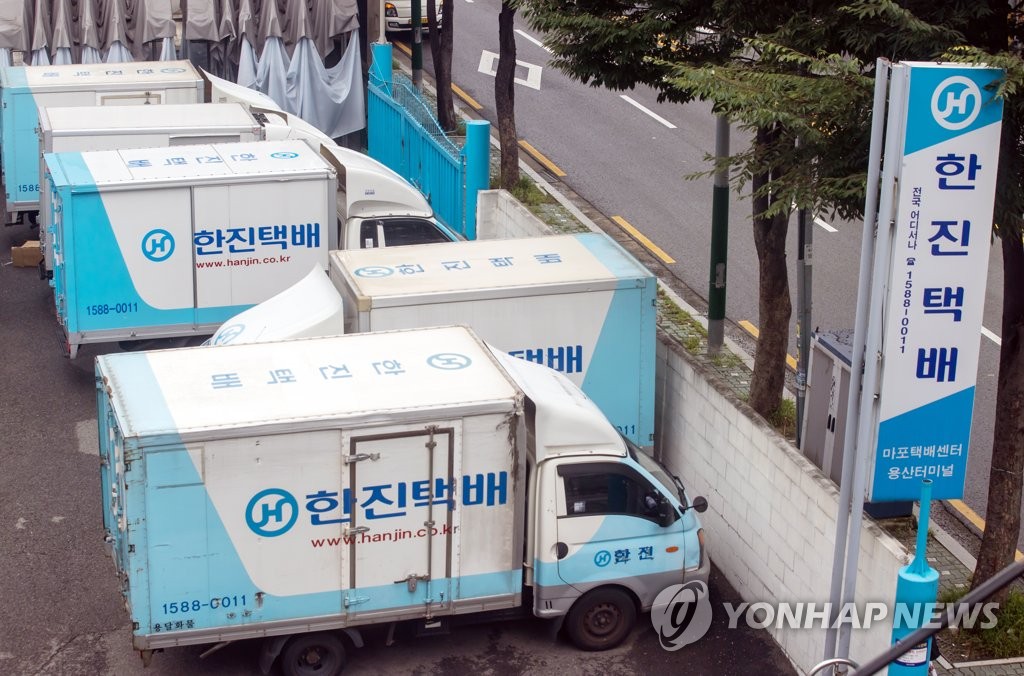 Meanwhile, the government decided to inspect major package delivery companies to check whether they abide by safety measures, including the prevention of overwork.

"We will conduct emergency inspections of 40 major sub-terminals and 400 branches of CJ Logistics, Hanjin Express and others regarding safety and health measures aimed at preventing health problems, such as overwork, from Oct. 21 to Nov. 13," Labor Minister Lee Jae-kap said during a government meeting on employment and labor issues.

The ministry plans to interview some 6,000 delivery workers who have contracted with those offices.

"The government will take appropriate legal actions if violations are confirmed," he added.

Lee also said the ministry has launched an investigation into the allegations that the application from a recently deceased CJ worker to renounce industrial accident insurance may have been written by someone else.

Officials conducted an on-spot investigation of the CJ branch where he worked last Friday and will look into other delivery offices to see if there are similar manipulations, possibly by branch operators to avoid paying insurance premiums, the ministry said.