The Human Rights Watch, the international nongovernment organization, shed further light on the rights conditions in the North with the report titled "Worth Less Than an Animal: Abuses and Due Process Violations in Pretrial Detention in North Korea."

It found that the investigation and judicial procedures in the reclusive regime are so "arbitrary and opaque," and bribing officials has become rife as a way to avoid detention or reduce charges.

The report is based on interviews conducted with victims and eyewitnesses, including 22 North Koreans who were detained and interrogated sometime after 2011, when leader Kim Jong-un came to power, and eight former North Korean officials who fled their home country.

"The experiences of those interviewed and the other evidence detailed below, show that torture, humiliation, coerced confessions, hunger, unhygienic conditions, and the necessity of connections and bribes to avoid the worst treatment appear to be fundamental characteristics," it said.

"Bribes and connections could persuade law enforcement officials to ignore or reduce the charges, improve conditions and treatment while in detention, or even have the case dismissed entirely." 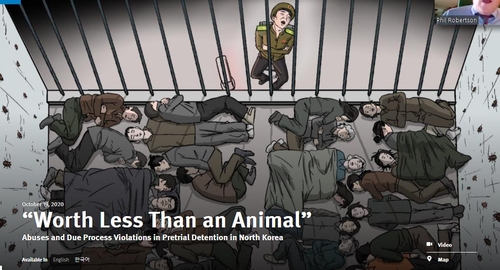 According to the accounts, detainees were forced to sit still in a certain posture -- like kneeling or with their legs crossed and their hands on top of their laps -- for up to 16 hours a day, or would get tortured for failing to do so.

They were given 80-200 grams of boiled corn and vegetable soup three times a day, and their cells, which reeked of unclean toilets, are so packed with other detainees that they had little space to lie down to sleep.

The report also included accounts of female detainees being deprived of hygiene items and sexually harassed and assaulted, including being raped.

The report called for North Korea to take legal and institutional reforms so as to ensure due process and fair trials in their systems in line with international standards.

"It has to be recognized that international pressure cannot be allowed to diminish on North Korea, if we're going to get anywhere in terms of progress on human rights," he said during a virtual press briefing on the report.