The shipments transported into the base for the THAAD system in the central town of Seongju, about 300 kilometers southeast of Seoul, included daily necessities for base troops and construction equipment and materials to be used to improve their living facilities, according to the ministry.

Their transportation was completed after riot police dispersed about 70 Seongju residents and civic activists, who had occupied a small bridge leading to the THAAD base from early morning to block any vehicles from approaching the military facility.

The protesters tied themselves up into ladder-like structures installed on the bridge to resist the police and shouted various slogans against THAAD.

Police mobilized about 700 riot police troops to evict the protesters, beginning shortly after noon, and completed the operations before 2 p.m. In the process, a female resident was injured and sent to a hospital.

After the protesters were dispersed, 31 dump trucks were seen heading into the base carrying sand, gravel and excavators. At present, the base's old barracks facilities are undergoing remodeling work. 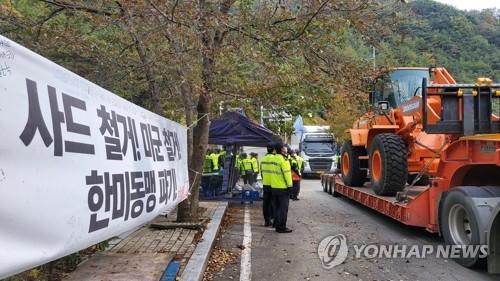 Earlier in the day, the defense ministry said Thursday's shipments do not include any missiles or other military equipment.

"Basic commodities to ensure the basic living rights of the troops, as well as some construction equipment and building materials such as sand, are being transported," a defense ministry official said during a regular press briefing.

"No weapons or other items that aim at upgrading or strengthening the unit are included," the official said, adding that the ground transport is inevitable as those items are too heavy to be airlifted.

In May, the ministry moved new interceptor missiles onto the base as replacements in a surprise overnight operation, which sparked speculation that South Korea and the U.S. might aim at upgrading the batteries there or deploying additional launchers. But the ministry flatly rejected it, saying such issues have never been discussed between the two countries.

"We visited civic activists in the region yesterday and gave detailed explanations about today's plan," the official said. "We will continue efforts to seek their understanding regarding the matter."

The ministry also noted that it has not had prior consultations with China regarding Thursday's transport, as no military hardware was involved this time. In May, the Seoul ministry notified China of the missile transport plan in advance. 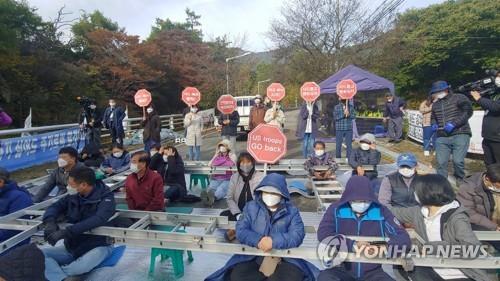