SEOUL, Oct. 22 (Yonhap) -- The main opposition party, allied with outside lawmakers, on Thursday submitted a bill calling for the launch of an independent special counsel investigation into a snowballing fund scam scandal currently under investigation by prosecutors.

Rep. Joo Ho-young, the floor leader of the People Power Party (PPP), submitted the legislation proposal to the National Assembly on behalf of his party earlier in the day.

All 103 PPP lawmakers signed on to support the bill, while seven lawmakers from outside the party joined the law proposal, including three from the minor conservative People's Party.

The bill calls for the dispatch of up to 30 prosecutors to the proposed independent special counsel team to investigate the scandal, along with up to 60 government workers.

It also proposed that the president pick the top special counsel out of the two candidates to be shortlisted by the Korean Bar Association.

The president assumes the authority to appoint four deputy special counsels under the law proposal, while the appointed top special counsel is entitled to name up to 60 investigators to back up the probe.

The investigation team will be given 70 days to carry out the probe, which can be extended by 30 more days upon approval from the president.

As for the scope of its mandate, the bill proposes that the team look into the massive financial losses inflicted on investors by two asset management companies, Lime and Optimus, and related allegations that the private equity investment firms illegally lobbied government officials and politicians, reportedly from both the ruling and main opposition parties, to cover up the cases and evade investigations. 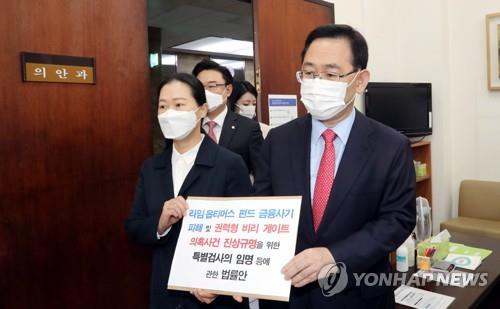 The cases are currently under investigation by the prosecution service. But PPP has been making a case for a separate independent probe by a special counsel, citing a lack of objectivity in the ongoing investigation.

Having rejected the proposal, however, the ruling Democratic Party, holding the absolute majority of 174 seats in the 300-member assembly, is likely to work to block the bill at the chamber.

"If (DP) rejects the (proposed) special counsel investigation, the public would assume that it has a lot to cover up, possibly that it might be a power abuse lobby gate," PPP floor leader Joo said in a party meeting before the bill's submission.

Branding it as a political offensive aimed at covering up alleged involvement of PPP members in the scandal, however, DP spokesman Choi In-ho said the case should be investigated promptly and fairly by prosecutors.