Lee embarked on a trip to Vietnam on Monday to meet with Vietnamese Prime Minister Nguyen Xuan Phuc and to check Samsung's operations there amid the pandemic.

During his trip, Samsung said Lee visited the company's plants in the Bac Ninh and Thai Nguyen provinces on Tuesday and Wednesday to inspect its smartphone and display businesses.

Vietnam is the largest smartphone production base for Samsung, the world's leading smartphone vendor.

On Thursday, Lee inspected Samsung's TV and home appliance factories in Ho Chi Minh City and discussed its long term business strategy, according to the company. 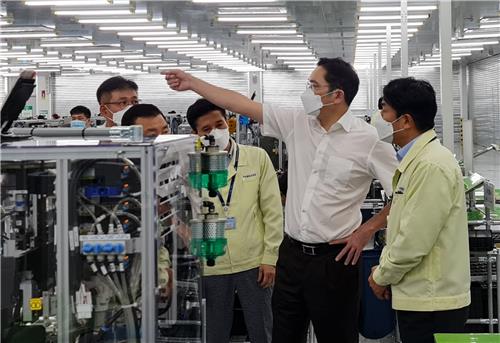 In his meeting with the Vietnamese prime minister Tuesday, Lee reportedly said he will study a way to make further investments in the Southeast Asian country.

The Vietnamese prime minister reportedly expressed his hopes that Samsung will make an investment in a semiconductor plant in Vietnam.

Samsung said Lee also looked around the construction site of the company's research and development center in Hanoi that is set to be completed by end-2022. About 3,000 employees are to work at the center dedicated to mobile device hardware and software research.

Lee's trip to Vietnam was his second overseas travel this month following his visit to Europe. He met with top executives from ASML Holding N.V., the world's leading photolithography equipment maker, in the Netherlands and visited the International Olympic Committee in Switzerland in his trip to Europe.