The Seoul High Court sentenced Kim Kwan-jin, who served as defense minister from 2010 to 2014, to 28 months in prison on charges of ordering the military cyber command to post online comments in favor of the then-conservative government around the general and presidential elections in 2012. 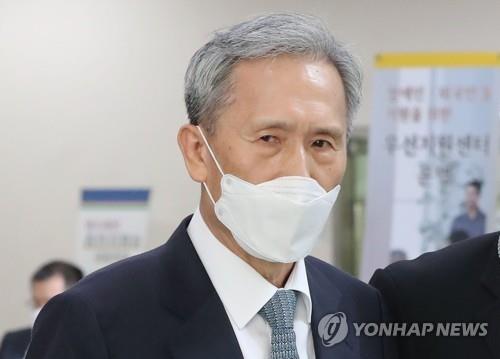 The commutation came after a lower court sentenced Kim to 30 months in prison on those and other charges, including abusing his power to hamper the defense ministry's investigation into the cyber command's alleged political meddling.

The appellate court acquitted Kim of the latter charge and cited that as a reason for not putting him under arrest.

"(Kim's) illegal involvement in forming the public's political opinion under the pretext of responding to North Korea's online psychological warfare was an unconstitutional act that violated his obligation to be neutral," the Seoul High Court said.

Kim, who served in two successive conservative administrations under Presidents Lee Myung-bak and Park Geun-hye, was indicted in 2018 following the election of the current liberal government of President Moon Jae-in.

He was accused of collaborating with other senior officials to instruct the cyber command to post some 9,000 online comments favorable to the government and critical of the opposition party.