SEOUL, Oct. 22 (Yonhap) -- A parcel delivery worker died while on duty this week, the latest in a series of couriers' deaths largely blamed on overwork amid an industry boom due to the coronavirus.

An advocacy group said Thursday that Kang Doo-han, 39, who was contracted with CJ Logistics, collapsed at a hub terminal near Seoul at 11:50 p.m. on Tuesday. He was sent to a hospital but died at 1 a.m. on Wednesday, it said.

Kang is the 13th worker in the industry who has died this year, at a time when the pandemic has led to a surge in online orders and shipment volumes. 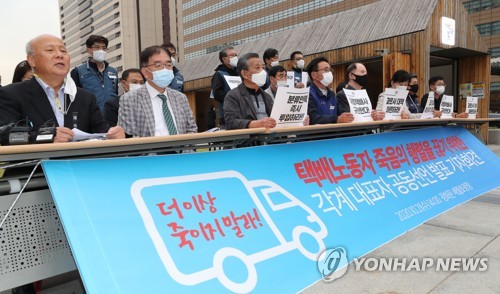 According to his family members and activists, the deceased suffered from extremely long hours of work just before his death.

He worked from 2 p.m. on Sunday to noon on Monday. He went back to work at 5 p.m. on Monday and continued to work before collapsing the following night, they said.

"The deceased usually worked at night. He was pressed hard for time and continued to work for several days without taking proper rest," said the group working for the rights of delivery workers.

The man had heart problems but the overwork is presumed to be the direct cause of his death, it added.
(END)