The annual Korea Sale FESTA will kick off Nov. 1 for a 15-day run, offering items ranging from electronics and furniture to cosmetics and apparel, according to the Ministry of Trade, Industry and Energy, and the organizing committee.

A total of 1,328 companies are slated to participate in the festival, making this year's edition the largest-ever event. The number is up from last year's 704 participants.

The number of participating consumer goods makers, including cars, apparel, electronics and cosmetics, will be more than double that for last year's event. Participating companies will hold a range of online and offline discount events, as well as offer freebies and giveaways. 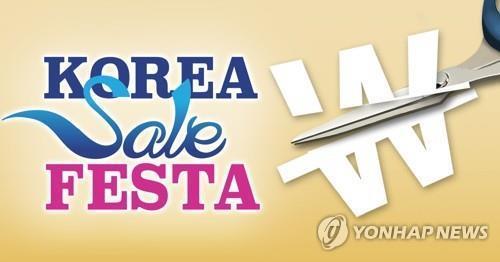 In particular, 17 municipal and provincial governments will participate, making the festival a nationwide event.

Large-scale sales promotion activities will also be held in a bid to induce foreign consumers to buy South Korean goods and help boost the country's overseas shipments, according to the ministry.

"South Korea urgently needs a consumption-promoting event involving consumers, companies, the central government and local administrations as there are signs of consumer spending picking up amid a downturn in coronavirus infections," Industry Minister Sung Yun-mo said in a meeting with organizers.

The government will try to mobilize all possible resources policy tools, including a cut in individual consumption taxes on cars, in an effort to make the shopping festival serve as an opportunity to help the struggling economy turn around, he added.

This year's festival will be the sixth since the government launched it in 2015 to help bolster the national economy, which had been hit hard by a Middle East Respiratory Syndrome outbreak.

The shopping festival comes as the coronavirus pandemic has caused South Korea's exports and private consumption to hit the skids, making a big dent in Asia's fourth-largest economy.

South Korea's consumer spending has remained in the doldrums. The composite consumer sentiment index (CCSI) came to 79.4 for September, down 8.8 points from 88.2 in August and marking the largest on-month fall since March. A reading below 100 means pessimists outnumber optimists.
(END)