SEOUL, Oct. 23 (Yonhap) -- A man has been sentenced to a 10-month prison term for assaulting a bus driver who had demanded the passenger wear a mask, as well as a police officer dispatched to the scene, a Seoul court said Friday.

The Seoul Northern District Court handed down the imprisonment ruling on the 61-year-old man, whose identity was withheld, on the account of assaulting a person behind the wheel.

Aboard a bus in central Seoul on Aug. 14, the man shouted at the bus driver and cursed at other passengers after the driver reminded him of the mandatory wearing of masks inside public transportation, according to court records.

After the driver reported his defiance to the police, the man attacked the driver, pulling the driver's hair and making threatening gestures, according to the court.

He also scratched a police officer dispatched to the scene and grabbed him by the neck, refusing to calm down.

Even after he was taken to a police station for questioning, he defied the police and bit a police officer's hand there, according to court records.

"The accused needs stern punishment as he committed another criminal act despite having a record of getting punishments for criminal assaults on numerous occasions in the past," the court said.

In a bid to contain the spread of COVID-19, the government, since last Tuesday, is mandating the wearing of protective face masks on public transport, a defiance of which could lead to a fine of 100,000 won (US$88). 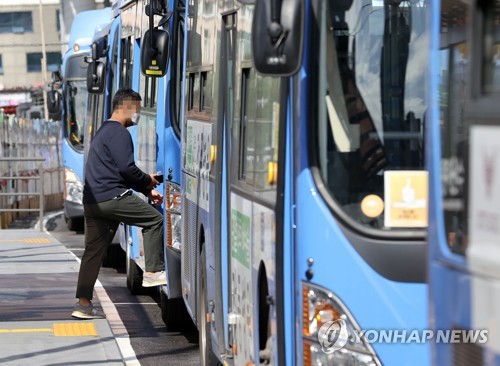 The file photo, taken Oct. 13, 2020, shows a passenger wearing a protective mask getting on a bus in Seoul, the first day that the government's order for mandatory mask wearing on public transportation, at medical facilities and during rallies took force. After a one-month grace period, the government will start levying fines on violators in November. (Yonhap)