"The Korean Peninsula should be a nuclear-free zone," he added while speaking in the second and last presidential TV debate with his Republican rival, President Donald Trump. 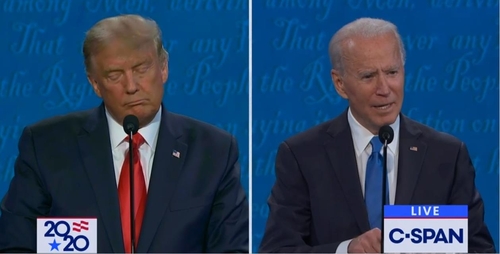 The former vice president argued Trump and his three meetings with Kim have only legitimatized the North Korean dictator.

"What has he done? He has legitimized North Korea. He has talked about his good buddy, who's a thug, a thug, and he talks about how we're better off," Biden said.

His remarks came shortly after Trump again claimed credit for preventing what he claims to have been an imminent nuclear war with North Korea.

"Guess what. It would be a nuclear war, and (Kim) does have plenty of nuclear capability. In the meantime, I have a very good relationship with him -- different kind of a guy, but he probably thinks the same thing about me. We have a different kind of relationship. We have a very good relationship, and there's no war," Trump said at the nationally televised debate, the last of its kind before the Nov. 3 presidential election.

Trump argued the North Korean issue was a "mess" when he took over from former President Barack Obama and Vice President Biden, but that he turned it around.

"They left me a mess. North Korea was a mess. And in fact, if you remember the first two or three months, there was a very dangerous period of my first three months before we sort of worked things out a little bit," he said.

Biden insisted Trump has done nothing but allow North Korea to build up its nuclear and long-range capabilities.

"He talks about how we're better off, and they have much more capable missiles, able to reach U.S. territory, much more easily than they ever did before," Biden said.

North Korea has maintained a self-imposed moratorium on nuclear and long-range missile tests since late 2017, about six months before Kim held the first-ever U.S.-North Korea summit with Trump in Singapore in June 2018.

Kim, however, said later that he no longer feels bound by the self-imposed restrictions on weapons testing.

On Oct. 10, the communist state unveiled a new and longer-range intercontinental ballistic missile (ICBM) in a military parade marking the 75th anniversary of the founding of its ruling Workers' Party.

Trump did not say whether he felt betrayed by the North's unveiling of its new ICBM when asked. Instead, he said he knew the North would not cause any trouble.

"You know about two months ago, he broke into a certain area. They said, 'Oh, there's going to be trouble.' I said, No, they're not. Because he's not going to do that, and I was right," the U.S. president said.

Trump has held three meetings with the North Korean leader, including their second bilateral summit held in Hanoi in February 2019.

Their talks, however, have stalled since their Hanoi summit ended without a deal.

Trump still boasted of his meetings with Kim, claiming Kim had refused to meet with his Democratic predecessor Obama.

Biden insisted Kim did not want to meet with Obama because the former U.S. president refused to legitimize the North Korean leader.

Trump again insisted if it were not for him, they would have been in a war with North Korea and that "32 million people in Seoul, millions of people would be dead right now."

Seoul is home to only about 10 million people, while the greater Seoul area, which includes the surrounding Gyeonggi Province and the western port city of Incheon, has about 25 million people.

Biden rebuked Trump, saying the U.S. had a "good relationship with (Adolf) Hitler before he, in fact, invaded the rest of Europe."