SEOUL, Oct. 23 (Yonhap) -- Culture ministers of the ASEAN Plus Three countries, including South Korea, China and Japan, have agreed to strengthen multilateral cultural and arts exchanges despite the coronavirus pandemic in their videoconference earlier this week, officials in Seoul said Friday.

The agreement was reached during the session joined by South Korean Minister of Culture, Sports and Tourism Park Yang-woo and his counterparts from China, Japan and 10 ASEAN member countries Thursday, they said. 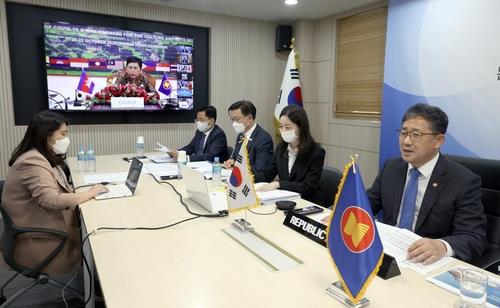 The ninth biennial ASEAN Plus Three Culture Ministers' Meeting was originally scheduled to take place in Phnom Penh, the capital of Cambodia, early this year but has been eventually held online due to the spread of COVID-19. All 13 culture ministers shared the view that international exchanges and cooperation should be sustained in the cultural and arts sectors regardless of the coronavirus outbreak.

The fourth South Korea-ASEAN Culture Ministers' Meeting was also held online on the sidelines of the event. Through the format, Park formally proposed establishing bilateral cooperation organizations on visual arts and cultural heritage between South Korea and the Association of South East Asian Nations. In response, ASEAN agreed to hold follow-up discussions on the creation of the two new cooperation bodies.

During the meetings, Park said South Korea is determined to further expand cultural diplomacy with ASEAN countries in line with its New Southern Policy.

He also asked the Asian countries to pay more attention to the Gwangju-based Asia Culture Center's Asia Culture Week event, which kicked off Oct. 17 and will continue through Oct. 29, featuring about 20 performances, exhibitions and participatory events.