SEOUL, Oct. 24 (Yonhap) -- Recent satellite imagery indicates North Korea has begun repairing flood damage to a reservoir overflow dam used to maintain a constant source of water for the cooling systems of its nuclear reactors in Yongbyon, according to 38 North, a U.S. website monitoring the North.

In a report posted Thursday (local time), 38 North said between Sept. 22 and Oct. 17, repair work began on the dam in the Kuryong River, which was breached by the flood waters of August.

Imagery from Sept. 22 showed a dramatic drop in the water level of the reservoir due to a breach at the east end of the overflow dam, 38 North said.

"Had the reactors been running, this would have prevented sufficient cooling water from being available via the pumps and cistern network," the report added.

There have been no signs this year that the 5 MWe reactor and the experimental light water reactor the Yongbyon Nuclear Scientific Research Center have been brought online.

Imagery from Oct. 17 also showed a dike-like structure being created just west of the break.

It is not clear whether it is being built to improve the reservoir or to divert the water to enable repairs to the damaged section, 38 North said. 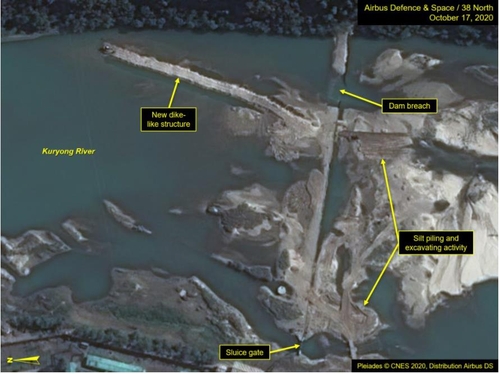