SEOUL, Oct. 25 (Yonhap) -- The giant for South Korea's economy as the head of Samsung Group, Lee Kun-hee, who passed away Sunday at age 78, also left an important mark on sports for his country.

Lee was a member of the International Olympic Committee (IOC) from 1996 to 2017, serving on its Cultural Commission in 1997 and Finance Commission from 1998 to 1999. With Samsung also emerging as one of the IOC's most important corporate partners, Lee played an instrumental role in helping bring the 2018 Winter Olympics to the South Korean alpine town of PyeongChang.

Lee, who had been hospitalized since 2014 following a heart attack, resigned from the IOC in 2017 and had been an honorary member of the organization since then.

In the early 2000s, Lee was one of three South Korean members of the IOC, joined by the former IOC Vice President Kim Un-yong and former Doosan Group Chairman Park Yong-sung. Lee's time at the IOC coincided with South Korea's heyday in international sports diplomacy.

Domestically, Lee was the president of the Korea Wrestling Federation (KWF) from 1982 to 1997. A former competitive wrestler in high school, Lee oversaw the golden age of South Korean wrestling, as the country picked up seven Olympic gold medals, 29 Asian Game gold medals and four world championships on his watch.

With Lee at the helm, Samsung Group launched professional and semi-pro teams in a wide range of sports, including baseball, football, basketball, volleyball, wrestling and table tennis. Lee was the owner of the Samsung Lions in the Korea Baseball Organization (KBO) from 1982 to 2001. 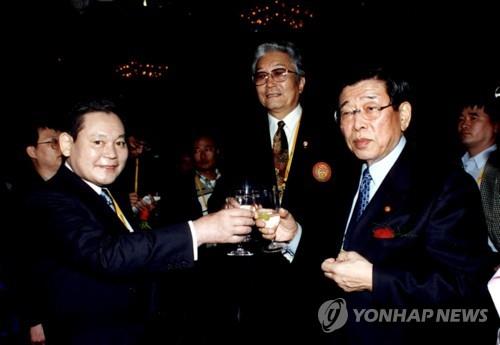