SEOUL, Oct. 25 (Yonhap) -- The International Olympic Committee (IOC) on Sunday expressed its condolences over the death of Samsung Group Chairman Lee Kun-hee, who had been an IOC member for more than a decade and an honorary member for another three years.

Lee died earlier in the day at age 78, six years after suffering a heart attack that left him bedridden.

The business tycoon was also an important figure in South Korean sports. He served as an IOC member from 1996 to 2007. Once he resigned in 2017 due to health issues, Lee became an honorary member of the organization. 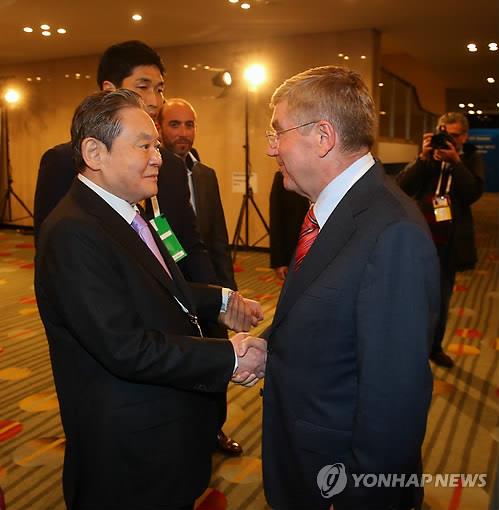 "The chairman of the Samsung Group since 1987, Mr. Lee was responsible for growing the company from a local business in the Republic of Korea into one of the global leaders in technology and a Worldwide Olympic Partner," the IOC said in a statement.

"Lee Kun-hee made a great contribution to the Olympic Movement and the success of the Olympic Games by not only making Samsung a TOP Partner of the IOC, but also by promoting the Olympic Games worldwide and by fostering the bond between sport and culture," IOC President Thomas Bach said. "This Olympic legacy of Lee Kun-hee will continue to live on. To commemorate him, the IOC will fly the Olympic flag at half-mast in Lausanne (in Switzerland)."

Within the IOC, Lee served on the Cultural Commission in 1997 and the Finance Commission from 1998 to 1999.