In May, South Korea launched a 40 trillion-won (US$35.4 billion) fund to provide financial aid to the country's backbone industries, including the airline service sector, amid the economic fallout of the coronavirus pandemic.

According to the sources, the operational council of the Key Industry Stabilization Fund is slated to hold a meeting Thursday to discuss whether to offer support to Jeju Air.

The main creditor, the Export-Import Bank of Korea, has recently conducted due diligence on the cash-strapped airline and estimated it needs a capital injection of about 170 billion won. 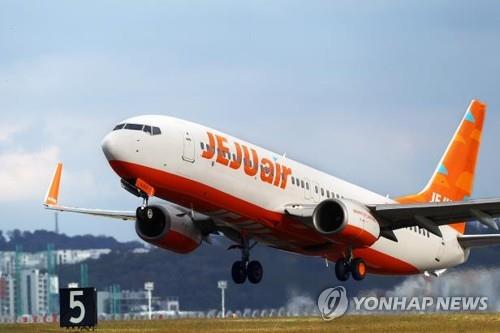 Industry watchers said Jeju Air has yet to make a formal request for support from the fund as it is currently in discussion with its creditors.

South Korea's two full-service carriers -- Korean Air Lines Co. and Asiana Airlines Inc. -- and Jeju Air and six peers have been reeling from a tumble in air travel demand sparked by the pandemic.

They have suspended most of their flights on international routes since March, as an increasing number of countries have toughened entry restrictions amid virus fears.

Jeju Air would be the second local air carrier to receive support from the fund. In early September, the fund approved a capital injection of 2.4 trillion won into Asiana Airlines to help the carrier stay afloat.

Stung by the pandemic impact, Jeju Air, which operates 44 B737-800 passenger jets, shifted to a net loss of 202 billion won in the January-June period from a net profit of 12.6 billion won a year earlier.

South Korea airlines, shippers and other major companies hit hard by the COVID-19 pandemic are eligible for support from the emergency fund if they have more than 500 billion won in debt and over 300 employees each.
(END)