The corresponding rate for the main opposition People Power Party this week stood at 27.3 percent, down 2.3 percentage points from a week ago, according to Realmeter.

The result expanded the DP's lead over the PPP to 7.8 percentage points.

Realmeter said the boosted approval rating for the ruling party may be attributable to a succession of news reports on opposition politicians' possible involvement in the investment scam scandal centering on two asset management firms, Lime and Optimus.

In his letters to the media, Kim Bong-hyun, a jailed key suspect in the financial fraud scandal, claimed that he lobbied sitting prosecutors and opposition politicians, as well as government officials and ruling party lawmakers.

The latest poll also showed that approval ratings for three minority parties, the Open Democratic Party, the People's Party and the Justice Party, were 7.1, 6.8 and 5.4 percent, respectively. 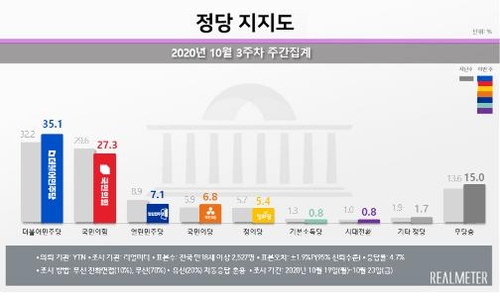 The poll also put the approval rating for President Moon Jae-in at 45.6 percent, down 0.2 percentage point from a week earlier.

A total of 49.6 percent of respondents gave a negative assessment of Moon, down 0.4 percentage point from last week, marking the first time that the rate of pessimistic public opinion toward the president has dropped below the 50 percent threshold since the first week of September.

The remaining 4.8 percent said they were not sure.

The latest survey has a confidence level of 95 percent, with a margin of error of plus or minus 1.9 percentage points. 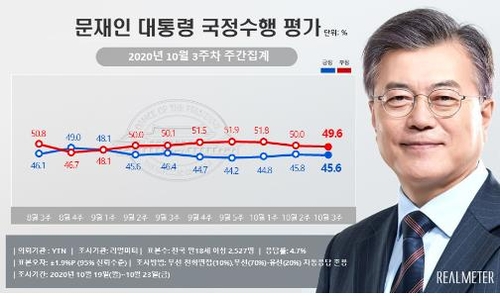